I learn. Usually about myself, and every day. Case in point, What I learned about myself by looking at a picture. Being ignorant is a gift. It means I can learn. (want to see some circular reasoning? Click here).

Sensitivity reading seems to come in two forms; Author incorrectly depicts X and/or Author uses a word or phrase which is offensive in some way, shape, or form.

But what do we do with offensive language? 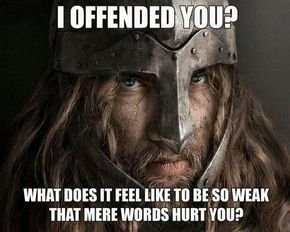 Deciding a writer is prejudiced or bigoted because they use specific words in their work is the same as deciding Da Vinci is his brushstrokes or Michealangelo his marble. See what they bring forth using their skill and tools and judge that.

Do they use their hammer and chisel to bring forth beauty and illuminate some truths? I bow to them!

Do they use their brush and palette to create something for the ages? How can I be like them?

Don’t extract one line and declare the entire work forfeit. Especially if that one line illuminates and illustrates something much more profound and deeper than the words themselves on a page or screen.

Ditto complete works. You may have a case if an author’s complete catalog, no matter how well written, demonstrates a intentional prejudice or bigotry (Asa Earl Carter’s catalog is a demonstration of this). 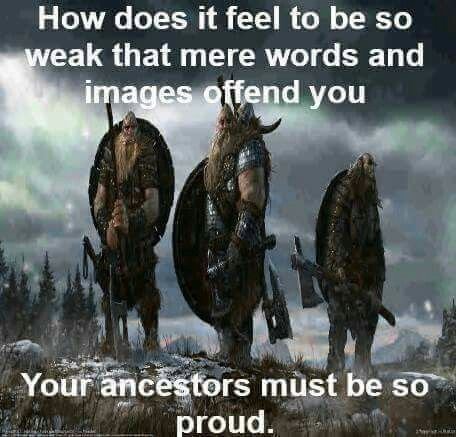 “You going to pay him a decent wage?”
“Yeah.”
“You going to treat him with respect in the workplace?”
“Yeah.”
“Then why the hell should I care? … I got some real honest to god battles to fight, Leo. I don’t have time for the cosmetic ones.”

Let’s go with that sentiment
You want to call someone out about an inaccurate depiction of an “oppressed minority” in their work?

But that inaccurate depiction of some minority is your focus? Good, ’cause god forbid you focus on stopping world hunger or modern slavery or child prostitution or mass genocide or ethnic conflict (and isn’t that the ultimate example of prejudice and bigotry?) or global warming or insuring everyone has potable water or sanitation.

I mean, sweet lordy! if pointing at one line or one word or one piece of art and telling people it’s not right is your idea of being on the front line, I’m glad you’re behind the wall.

Because, by god, at least you’re not in my way when you’re back there.

What I’ve learned about myself
I’ve been studying “Sensitivity Readers” as a concept for much of this year. My real issue with sensitivity reading is two-fold; you’ve given an existing thing – research – a new name – sensitivity read – because the existing name smacks of work and the new name smacks of a desire for peace, harmony, and endless cruises on The Love Boat.

This is something which happens a lot in marketing. The old term is, well, old, and nobody will pay attention to it so use a new term which gets everybody’s attention.

Growth is limited by that necessity which is present in the least amount. – Lady Jessica in Frank Herbert’s Dune

My second issue goes back to Ruminations Part 3 – Sensitivity Readers, Part 1; sensitivity reading allows people to be lazy and not do the necessary work, ie research, to add verisimilitude to their story. (one review of The Augmented Man included “And author Joseph Carrabis paints him and every character around him with the verisimilitude of a man who’s been to war and got more than his hands dirty.” Want to know how proud that made me?)

So does sensitivity reading per se bother me?
No. I think it’s a waste of time and does little more than provide lazy people with a means to be lazier, but being lazy and not doing the work seems to be a thing these days. Give people a crutch and they’ll use it rather than learn to walk without one, which means lots of walking experiences are denied to them.

And that’s their loss, not mine.