About the Author
Sara Wesley McBride holds a BA in theater from UCLA and a BS in Molecular/Cellular Biology from SDSU, which she feels are completely related. She finds inspiration for her ghost stories while inventing colorful insults to sling at million-dollar machines in the decaying dungeons of academic halls.
Her first novel in the Alexis Lynn series, Will Write for Wine, and the companion short story collection, Stories I Stole from Lord Byron’s Bastard, both set in Venice, Italy, were recently released by Puck Publishing. She’s hard at work on the second Alexis Lynn novel, a Regency mystery series, and a haunted play. She strongly feels the world needs more haunted plays. She can be found hiking the shorelines of San Diego with her husband and their tiny bouncy dog named Wombat. 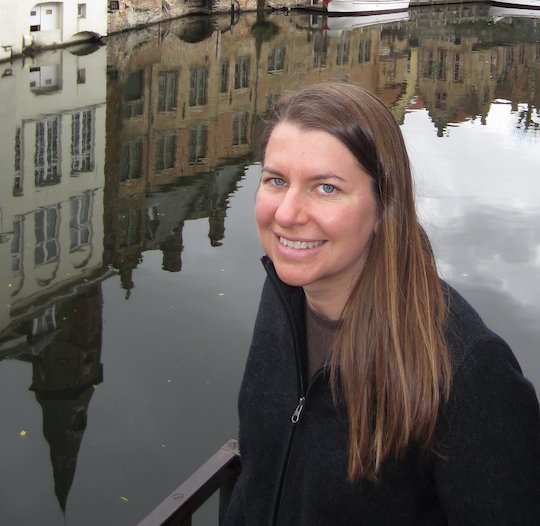 How the stories came about?
The Devil’s Bridge – I’m a history nerd and one day in Venice, lost in the Castello area–not unusual for me–I walked over a bridge named Ponte del Diavolo, or Devil’s Bridge. I dug into the Venetian archives and reported legends, but couldn’t find an origin story for this eerily named bridge, so I decided to make my own legend. The palazzo at the end of the bridge is now an elegant hotel, Hotel Palazzo Priuli, which was once owned by the Priuli family who produced several doges in the sixteenth and seventeenth century, basically the president of Venice. One Priuli doge in particular was a horrible leader who had several innocent noblemen executed for treason. To be fair, Venice was in a spy war with the Spanish, but this particular doge was known for being a bit hasty and cruel. So I decided to literally link the Devil to the doge who lived at the edge of Devil’s Bridge.

The Haunted Palazzo – I got obsessed with Venetian sewer systems and discovered that many of the old palazzos had sewer chutes that dumped into essentially narrow canals with low ceilings that linked up with the larger canal system. At the same time, I learned about warring factions within Venice during the Renaissance and later, that often accused each other of avoiding customs tariffs by smuggling. Of course, the details of Venetian smuggling practices are vague, so I imagined that the old sewer tunnels could be used. All the pieces for an long-ago unsanctioned romance, a murder, and a ghost causing damage to a palazzo renovation simply fell into place.

The gondolier steered us down the dark waterways of a moonless night and rowed under a stone archway. Engraved on the keystone was Ponte del Diavolo, the Devil’s Bridge. That morning, I had awoken to Death. That evening, I did not desire another visit.
The damp air clung to my skirts and hair. My bodice reeked of brine and rot. The gondola stopped. It rocked and thumped against a wooden platform. There were shouts and the clang of an iron gate sliding away from the outside water entrance of the Venetian palazzo. A flickering, fiery light illuminated the lancet windows overhead, making them look more like the gates of Hell than the inviting home of an old friend.

It’s never recommended to sleep alone in a six-hundred-year-old haunted Venetian palazzo. So I didn’t. I took a friend with endless curls of boisterous red hair and my dog, a scrappy little black and grey terrier named Toto. It was late February, and the air was moist, cold, and fetid inside the old palazzo. Despite the offensive smell, it wasn’t all spider webs and rough wood. My friend Claudio and his architectural restoration company had already spent nine months modernizing the palazzo with new electrical wiring, wood paneling, tiling, marble counters, bathrooms with actual plumbing instead of a chamber pot, and refurbishing the original grand staircase, which required a stonemason. Apparently, in Venice, one can make a living as a stonemason. Claudio told me that several of his workmen believed the palazzo to be haunted, which would not be unusual in the creepy, fog-laden city of Venice.