About the Author
Patty Fletcher is a single mother with a beautiful daughter, of whom she is enormously proud. She has a great son-in-law and six beautiful grandchildren. From April 2011 through September 2020, she owned and handled a black Labrador from The Seeing Eye® named King Campbell Lee Fletcher A.K.A. Bubba. Sadly, after a long battle with illness on September 24, 2020, King Campbell went to the Rainbow Bridge where all is peace and love. In July 2021, she returned to The Seeing Eye® and was paired with a Black Labrador Golden Retriever cross named Blue. 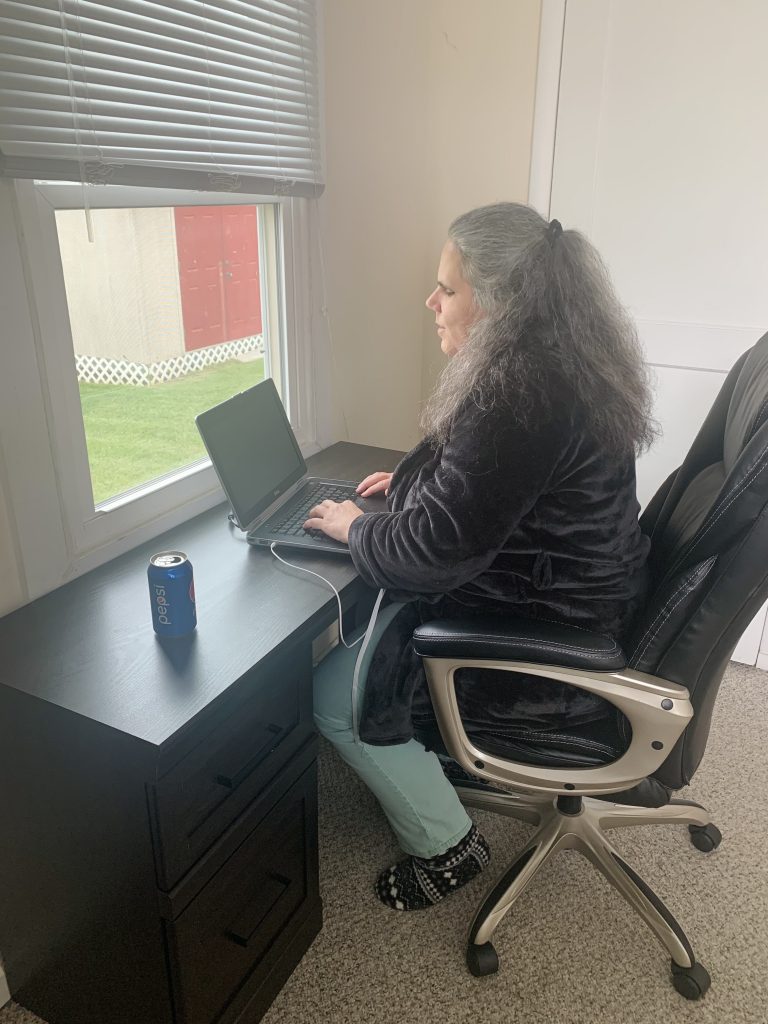 How the story came about?
When Kaye wrote and asked me to write a guest post explaining my inspiration for The Portal Brings Christmas Love at first, I had no clue what to say.
The reasons are a bit tangled as is a lot of my life from the time period during which this story idea first came to me.
In 2016 as the elections in the US were getting under way, there was a lot of unrest not only in the political arena but in my personal life as well.
I was just beginning the journey from the darkness which had covered my life for the previous four years into the light and finding no way to gain closure for some of the damage I’d caused found myself on early Christmas Eve morning alone and feeling quite sad.
While clearing up the dishes and cleaning the kitchen from the night before, I began to wonder what would happen if the people of our country rose up and stated, ‘No More.’ I also wondered what it would feel like if I could wish up the one I longed to be with for the holidays and the next thing I knew, I was at my desk, pounding out a story.
For years, it languished in a folder, then along came Kaye and the call for submissions for the Visions Anthology contest and I thought, why not?
I had to do a lot of touch up work and then send it off to my editor. After that I held my breath and sent it to Kaye.
Some weeks later, to my delighted surprise, I learned that my story had been accepted and so, at least my wish to be included in the company of great talent was granted.>
I hope others will enjoy reading my story as much as I enjoyed writing it.
Thanks to Kay and WordCrafter for giving me this incredible opportunity to share my work with the world.

Opening
I awoke just after midnight on that early Christmas morn. Though I knew I should be happy, there was a horrible emptiness inside me. My longing for Derrick had become all-consuming. All I wanted for Christmas was to hold him. He’d been mine and King’s trainer and we’d shared some happy times. But when I’d come back to Korponious, my life had somehow turned itself inside out. Due to my fiancé’s abuse, my mental illness had spun horribly out of control. For a time, I’d been terribly lost to the darkness. It was a prolonged period of spiraling behavior, during which I’d destroyed the friendship between Derrick and me–and had damn near killed myself.