About the Author
C.R. Johansson writes gripping thriller, science fiction, and fantasy stories with a genetic twist. Her characters explore universes where the unknown prevails and the impossible is possible akin to her life with congenital heart disease. She lives in the Pacific Northwest with her husband and comical pugs. When not writing, she enjoys listening to the river nearby, working in her garden, paper mache’, knitting and sitting on the couch drinking tea. 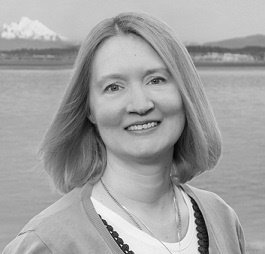 How the story came about?
Itwashar. From the moment Lok growled the word into my mind’s ear, Her Beholder was born. I knew it was going to be a love story of life and death, but I was surprised to discover that it went beyond the basic beauty and the beast idea. It was a bittersweet love story not only between an ogre and a woman, but more precisely a love story between a woman, her lost child, and the mirror of time. Some say a little bit of the writer is visible in every story they write and perhaps when I lost my own dreams of motherhood to disease played a role in my inspiration of Her Beholder.

Opening
It was hard to breathe. Her lungs were a disgusting ensemble of snaps, crackles, and gurgles as she pulled the resistant air in. From her bed, she could hear Lock humming Tchaikovsky and see his massive shadow swallowing up the candlelight in the kitchen where she set him about making dinner. After more than two hundred and a half years, the joy life once brought was gone. Her heart was an empty void. She wanted nothing more than to die and he was not going to interfere this time. She hoped to be gone before he finished.