About the Author
David M. Donachie is a writer, artist, programmer, and games designer, who lives in a draughty Scottish garret with two cats, a frog, four mice, and a large number of reptiles. His short story collection The Night Alphabet released in 2018, and his first novel, the mesolithic fantasy The Drowning Land, in January 2021. If you want to know more about him, visit https://bit.ly/ddonachiewriter or on Facebook. 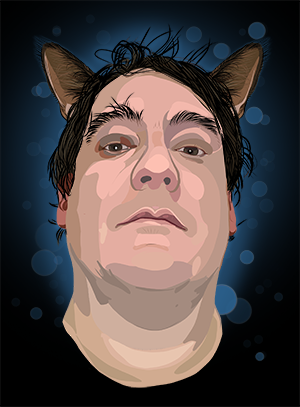 How the stories came about?
“The Gap” was written for an anthology I published in 2018, The Night Alphabet, all about the mixing of dreams and reality. Most of the stories were taken from my own dreams, or from odd moments in my normal life, and “The Gap” is no different. Some years ago we had building work done that opened a crack in the plaster of one of our walls, wide enough that you could, almost, peer inside. I wondered what might be on the other side of that gap, and imagined a crack that opened into another world. “The Gap” is the result. The title, by the way, was probably influenced by Stephen Donaldson’s “The Gap into Vision”, which isn’t about cracks or other worlds at all.

Opening
At the start of October I accepted a job renovating an abandoned building. It was hard manual labour in an out of the way location, a bleak and lonely estate unused since the sixties, but it suited my mood — it had been three months since Hazel left me; I was in need of distraction, but not company.
Rowlands House sat on the edge of town, a brick and wood edifice marred by later concrete additions. Behind the anonymous surrounding wall everything was dilapidated and overgrown. Tangles of willowherb rose higher than my head when I arrived, concealing heaps of rubble from some previous attempt at restoration.
Mrs. Sito, who was in some way connected to the renovation project, met me on the first day, clipboard in hand, to show me around.