The Augmented Man was released 25 July 2019. The publisher (I use the term loosely) made too many errors for me to stay with them. Another publisher approached me within a week and while they’re getting the book in their queue, I’m offering author-signed copies. You get to tell me what you’d like written (remember to be nice. Nothing libelous, actionable, et cetera). The price is 20US$/copy and includes shipping. 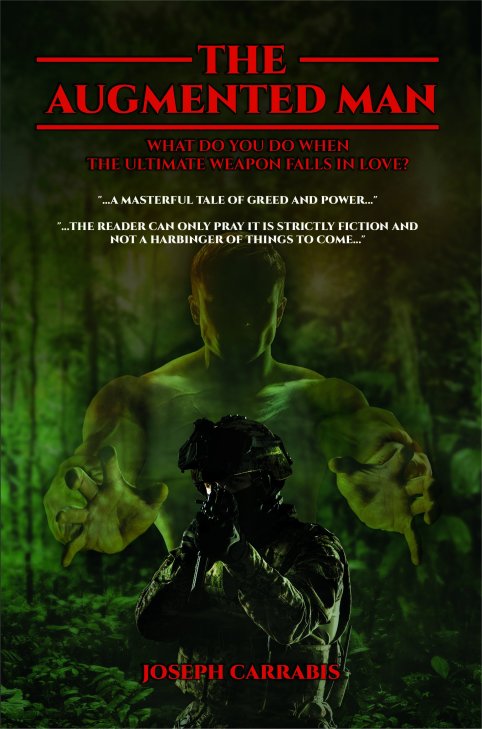 Carrabis writes a masterful tale of how greed and power can corrupt the better judgement of a man. Although this story is set in the future, it actually seems plausible that the sorts of physiological and psychological modifications discussed and inflicted on some of the characters could and have occurred in the name of military dominance. It was fascinating to me how Carrabis compared the capability of Navy Seals as an example against the next gen efforts as well as the results.
Not only did the story grab my attention from the first scene opening in the bar, but it enthralled me until the very end. I felt drawn to Nick Trailer from the outset with a compassion for the life he was forced to live. He is a warrior who struggles to find his way in a world against him from the start. Nick’s relationship with Major Donaldson is one which I suspect many leaders have with their men. I liked both of these characters for very different reasons because they were so well developed. Learning all the whys and wherefores of Trailer’s life from both men’s perspective had me turning the pages until the surprising end.
All of the scenes set the perfect stage for a movie playing in my mind as I raced through the story. The descriptions were vivid and certainly exacting for gruesome military combat actions, yet realistic and plausible. Covert squads, spies, behind closed doors actions, and intrigue create great action stories. Carrabis has no shortage of action or intrigue as he lifts the curtain to reveal actions sanctioned by government leaders in a crass offhanded manner like changing shoes after stepping into a few inches of mud. I would certainly recommend this story to any reader who likes to consider the possible while reading a complex story with a heavy lacing of conspiracy, which I do hope is purely fiction, yet … what do I know about what the military does behind closed doors at the direction of powerful leaders?
– Rox Burkey, CoAuthor of the Award Winning Enigma Series

But the horrors of war never stay on the battlefield. They always come home.
Battling what society and science has made him, Nick Trailer discovers he is loved. From the horrors of childhood to the horrors of a war, what does it take for someone to find true love and peace? Especially when everyone has their own agenda, from the senators who sanctioned his making to the Governor of Maine who wants to use Nick’s struggle to propel himself to the White House.

The Augmented Men were good at war, perhaps a little too good. Now they have to come home…or do they? What do you do with man-made monsters?
Nick must decide if his friends are his friends and if his enemies are his enemies, all while protecting the woman he loves.

And are you truly the last of your kind?
What if you must remain a monster to defeat a monster? Will you sacrifice love to protect what you love?

In the same vein as Orson Scott Card’s, Ender’s Game – Joseph Carrabis’s newest novel, The Augmented Man, thrusts the reader into an unknown but realistic world of the future where governments create devastating war weapons of their choosing. In this fast paced thriller those weapons are nothing more than abused children who grow up in a society which has no room for them until Captain James Donaldson finds a useful purpose for these cast offs. These poor wretches who have never felt the love of another human being and have no hope at a normal life eventually learn of their future. A future so terrifying and painful all they can do is suffer through it at the hands of Donaldson. What he creates for them is a living hell. His plan was to genetically modify the children and as they mature becoming the very tools of destruction which are nothing less than terrifying. After their usefulness is complete there is another plan of Donaldson’s which goes horribly wrong. Instead of termination for all of these manufactured miscreants as planned, a miscalculation arises leaving Donaldson fighting for his life as well as humankind. His own perverted experiment has come back to haunt him. This exciting story will make the reader truly question if such things as The Augmented Man could or does exist under the blackness of government secrecy. At the conclusion of the novel, the reader can only pray it is strictly fiction and not a harbinger of things to come in the near future. – John R. Beyer, award winning author of fictional short stories and novels.