Note: This material originally appeared on a marketing site and dealt with branding. People who know what they’re doing recognize all branding is an application of neuroscience, hence neuromarketing (which may have been a part of neuroscience at one point and now is a buzzword and poorly degraded from its original).
I’m resurrecting it for a friend who’s curious about The 3x Rule.
The 3x Rule has broad applications – everything from education to marketing to branding to military training and for the purposes of writing, creating memorable characters. You can use The 3x Rule to have your children, partners, peers, et cetera, remember to do something when they need to do it.
I use the The 3x Rule rule in my writing to lock characters and scenes into reader memory.
Enjoy!

The 3x Rule has six elements:

Let’s explore each element separately then put them together.

Most fictional aliens are variants of recognizable earth lifeforms. That’s why most StarTrekTM aliens had two arms, two legs, a head, eyes, ears, nose, mouth… Didn’t matter where the aliens originated, they pretty much had the same bilateral symmetry humans have. Want to indicate the alien was nasty? Make him bilaterally non-symmetric. No Borg (except the Queen Mum and 7of9) had bilateral symmetry. They all had some kind of projection coming out of them somewhere or a huge prosthetic attached somewhere (simply put, they were out-of-balance). The Queen Mum and 7of9 were exceptions because their purpose (scriptwise) was to interact with and/or seduce humans (a different kind of assimilation, if you will).
END_OF_DOCUMENT_TOKEN_TO_BE_REPLACED

I’ve been using the so-called Little Book for years but only as a reference, not a resource. That changed recently when I’d finished editing a work-in-progress, The Inheritors, and had some spare cycles. 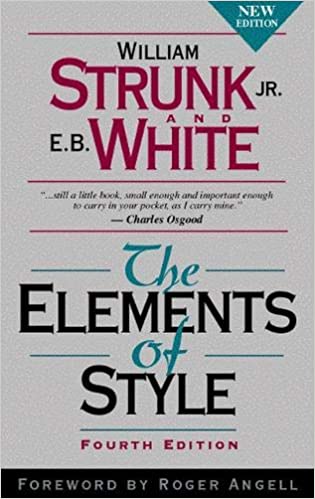 Definitely keep The Elements of Style handy as a resource. Keep it right next to your keyboard. I have physical copies near all my workplaces and electronic copies on all my devices. Because my memory could drain wet freshly cooked pasta, I pick it up several times a day and often for the same things.

The Elements of Style is rich in examples. My ninety-two page edition (complete with index) is now half dog-eared with notes waiting to be transcribed.

Yes, most people I know are familiar with Section I: Elementary Rules of Usage; when to use a comma, when to use a semicolon, how to form possessives, participle phrases, and all that grammar stuff.

Good! That’s what I used it for. Until this reading.

Please give yourself the opportunity to read the Introduction (it’s short and rich). Take a tour through Section II: Elementary Principles of Composition. Meander through Sections III and V: A Few Matters or Form and An Approach to Style respectively. Stroll through Section IV: Words and Expressions Commonly Misused (made myself an autocorrect list out of these).

Go slow, look around, and enjoy. The Little Book is a book mechanic’s toolchest. Get your hands dirty. It’s worth it.

One member of a writing group told me they read a story in which a Magical Voodoo person saves the day.

The class I mentioned in Ruminations Part 3 – Sensitivity Readers, Part 3 – I Take a “Writing the Other” class spent time talking about Magical Negroes and specifically Stephen King’s use of a Magical Negro in The Green Mile.

Both statements were examples of ignorance at play to me.
END_OF_DOCUMENT_TOKEN_TO_BE_REPLACED

Another book purchased years ago and finally read because a work-in-progress, Search, had mystery elements and I wanted to know ahead of time what I should be doing and what to look out for. 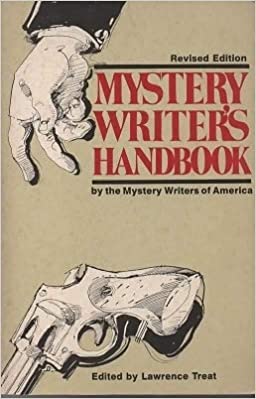 Mystery Writer’s Handbook, like most of the writing books I’ve reviewed on my website, is a worthy read for all authors, writers, and writer-wannabes. It’s focus is mystery and its view is broad. Romantic suspense novels fall into the mystery fold. I didn’t know there was such a genre, but I do now and surprise! my work-in-progress with mystery elements is more a romantic suspense novel than not.

Like all writing books, it discusses character, scene, POV, dialogue, description, and the like. Its real power is in both plot – because good plot tends to drive most mystery and the plot techniques are gems – and editing – the chapter on revising and editing is truly a standout. An extra bonus is a short section on contracts. Many of the books I’ve read mention contracts, Mystery Writer’s Handbook provides a roadmap of potholes and things to avoid.

Its a cracking read, that will also make you think, like all good science fiction. #scifi #geneticmodification #military #soldier #psych #thriller http://nlb.pub/Augmented

In the end, you'll see who's fake, who's true and who will risk it all for you. #quotes