I’m honored, I’m flattered, I’m thrilled, and I hope everyone enjoys reading it.

The Boy Who Loved Horses is based on time spent working in the Kentucky Appalachians. Truly beautiful country with truly wonderful people who understood the meaning of “community.”

I am fortunate to be accepted by them.

I was born in a town like this. Mine’s on the eastern ridge and closer to Raleigh. My town had the same dirt roads, the same one-room wooden church, the same old store where you asked for things instead of getting them yourself, the same people but with different faces, the same old men carrying coon rifles, girls getting married when they’re thirteen and younger, having kids before they’re through being kids themselves, the same sense of what’s ours and what’s not. I left my town and got educated. Made it into the extension service. Decided to come back and help others in towns like mine. My education didn’t take all the hill out of me, though. Knew enough to carry a gun in case I got too close to a still. But it did take some of the hill away. I forgot about towns like this.

Take a read and let me know what you think.

The Boy Who Loved Horses is also in my Tales Told ‘Round Celestial Campfires anthology. 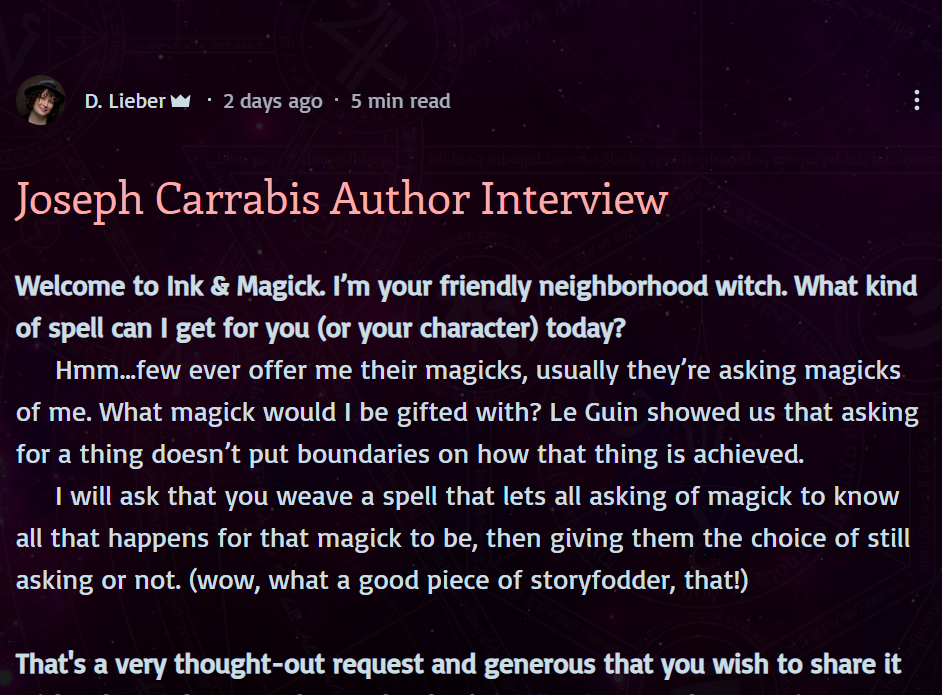 Let’s start with this exchange:
Q: What kind of spell can I get for you (or your character) today?
Hmm…few ever offer me their magicks, usually they’re asking magicks of me. What magick would I be gifted with? Le Guin showed us that asking for a thing doesn’t put boundaries on how that thing is achieved.
I will ask that you weave a spell that lets all asking of magick to know all that happens for that magick to be, then giving them the choice of still asking or not. (wow, what a good piece of storyfodder, that!)

And it gets better.

I should also add that D. Lieber is an author after my own heart; “D. Lieber is an urban fantasy author who writes stories she wants to read.” so similar to my Twitter “I’ve decided to spend the rest of my life writing things I’d enjoy reading. Who knows? You might enjoy them, too.”

So give a read, let us know what you think, and thanks.

I know, it’s true. I should have known better and I’m ashamed of myself.

IT WAS SO MUCH FUN!

Teri asked me a bunch of questions – Would you rather be a vampire or a lion tamer? (no, that’s not right. I have The Magic Show on my mind. sorry), What’s the most difficult thing about writing characters of the opposite sex?, As a writer, what would you choose as your mascot/avatar/spirit animal? and others.

I must have done good because the comments were flattering and I do oh so love flattery.

And please check out Teri’s books. We’ll both appreciate it (my reward is knowing I helped Teri out).

Okay, another version of a story started in 1994. I posted the start of a major revision in Tag (now available free to everyone).

That major revision is going to turn into either a novella or novel set in the same geographic location as this story, although a bit in the future. This version here is preamble, probably something mentioned in that longer story as a predicating event.

This version also came about using different/new writing methods for me and is somewhat experimental. Do let me know what you think.

And definitely let me know what the title is. I’m open to suggestion.

Julia danced among oaks and ash, two short steps towards Eric, two long steps away, always drawing him into the hollow, always a hand or two beyond his reach. Once one of her long, blonde braids brushed the back of his hand and he almost had her, but he wasn’t quick enough, never quick enough.

Eric stopped as Julia entered a copse of ancient, dark boled trees. His hands staid his knife and axe, good forester’s tools his father gave him, swinging from his belt. “We are too far from the village.”

“Says your grandmother who brings apples to any who will listen.”

“The old ones are old.” She disappeared among the trees.

Eric paced outside the copse. “The skies darken. A storm approaches. We must get back before we have to take shelter.”

She singsonged from deep in the hollow, “Oh, Eric. Oh, help me, Eric.”

He closed his eyes and shook his head, his arms crossed tightly over his chest.

Eric lifted his axe and entered the copse. A hand spun him as he passed a thick bodied willow. His axe flashed up.

Julia leaned against a deeply boled ash, her hands over her stomach, laughing. “Oh, Eric. You’re such a child.”

He lowered his axe, his nostrils flared, his face red. “First and old woman and now a child. And in both I’m alive. You play a dangerous game, Julia.”

“Oh, poo poo poo, Master Eric.” She held her arms out to him. “Would you like a reward for your gallantry?”

Eric brushed her hands away as he turned back towards their village, his axe still in his hand. “Sometimes the reward isn’t worth the risk.”

Something snagged his axe hand. He spun back at her. “I have had enough — ”

A hand formed of twigs reached around Julia’s face, filling her mouth with leaves, choking her. A branch gripped his axe hand, holding it to his side, pulling him into the bole.

Julia took the axe from his hand as the tree pulled him beside her. She swung at the branch holding him. A voice shrieked from inside the bole. Red, blood-like sap covered Eric’s face as the branch snapped back. He screamed and covered his eyes.

Branches gathered around them and became flesh covered arms. Lightning broke through the trees overhead. Thunder shook the hollow.

A single rain drop fell onto the hand covering Julia’s mouth. It steamed like fields on a hot summer morning.

Rain drops blew through the leaves. The arms blistered into branches where the rain struck them. Pink flesh boiled into black bark. The thing in the bole screamed like a pig under the butcher’s hand.

Julia swung Eric’s axe again. The hand covering her mouth snapped back, clasping the side of the ash. A woman, half crone, half maiden, appeared in the bole.

Eric reached out, his hands searching.

The crone spoke in Julia’s voice. “This way, Eric. This way.”

Julia grabbed Eric’s hand and pulled him back.

Winds gathered rain. The smells of a sweet spring storm swept through the hollow.

The witch screamed and withdrew into the bole.

“Hurry, Eric. Run.” She pulled him, half dragged him, to the top of the crest of the rise encircling the hollow and stopped. Rain rolled down their faces, parted their hair, stuck their clothes to their cold, sweating skin.

Julia’s hand went to her breast as she gasped for breath. Eric held tight.

“We’re safe, Eric. Witches fear the rain. That’s what the Old Ones say. Grandmother tells us about them often. They can’t be out in the rain. She can’t hurt us as long as it rains.”

His beautiful eyes, eyes that once glowed like candles when they looked upon her, were covered with white, weeping flesh, no pupils visible at all.

The witch, inside her dark bole, laughed.