Children, playing in our yard

I’m taking a break from submitting and writing to do some writing.

Some readers may remember the NextStage Evolution Facebook page. It’s long gone and it was probably best known for the wildlife pictures and stories there. Susan (I mention her on the About Joseph page) and I have been working with the wildlife in our backyard going on ten years at this point. One of our regrets about taking down the NextStage Evolution Facebook page was taking down all those wildlife photos.

I’ve written about the wildlife interactions in several places. Perhaps best known is Nothing Ever Dies of Old Age in The Wild (republished on Discover The Practice). Much of the wildlife in our yard have learned to take food from my hand. Bart, an owl from a few years back, would perch in a nearby tree when I was grilling and wait for me to toss him bits of meat (don’t tell Susan. She always wondered why some steaks shrunk so much when I grilled them).

The wildlife still comes. There hasn’t been as much this year. We had two regular racoons, Hecate and Deneb, and never saw any trace of other wildlife. One year we had 19 racoons in our yard, three skunk, two red fox and their kits, some gray fox and their kits, a deer, …

But not this year. I asked Hecate where all the racoons were and she said, “There are three of us.”

I didn’t know what she meant. Did she have two kits? Were there only three adult racoons in a woodland area that once supported racoon colonies?

A few nights later Hecate and Deneb were eating some peanuts and yep, a third racoon, Leopold, came forward. Shy at first, then getting right in there with his peers.

Then we saw Kirkpatrick, an amazingly healthy northern coyote. 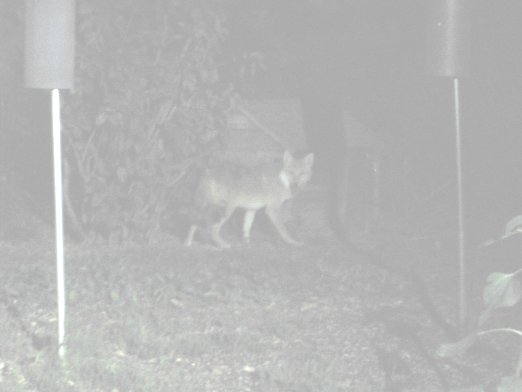 We’d been hearing coyote for several nights (quite soothing) and wondered if that explained the dearth of wildlife.

Then we saw some gray fox and a bob (sorry, they’re quite shy. No pictures yet. Haven’t even told me their names).

Okay, that variety of predators, perhaps few scavangers have made it to Fall.

Then Olivia the Opossum showed up (again, no pix yet). The next night she brought her partner, Max (nope, both shy).