“Bad Ass just got a new poster boy…in The Augmented Man” (and the author’s not bad, either)

FWIW, I received my first royalty check today. THANKEE TO EVERYONE BUYING THIS BOOK! Come on by and I’ll sign your copy for you! Come on by, buy half a dozen copies for your friends, and I’ll sign all of them, too!

A bit about The Augmented Man
The US Military concedes that any kind of combat leaves soldiers psychologically damaged and makes reintegration to society difficult.

Anecdote
I read the the Surface section and the first Apache helicopter gunship scene (pgs 228-230 in the print version) of The Augmented Man as my text.

I finished and looked up to see the audience staring at me, wide-eyed, deers caught in headlights. One fellow whispered, “Intense.” Everyone else nodded.

YES! Score one for the author!

I thought I’d give folks a bit of a treat and/or break today.

A treat – I’ll read excerpts from The Augmented Man.

A break – in case a steady diet of Empty Sky is becoming tiresome. 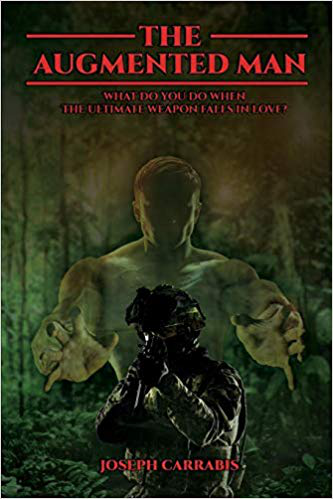 A while back I polled readers regarding what single scene they’d like to hear read aloud. Everybody had great suggestions and four scenes came to the top. Everybody thought the final scene was amazing and no, I’m not going to share it aloud here. Read it for yourself. I don’t want to give anything away.

The other three top scenes are offered here: Surface, Donaldson introducing the Augmented Men to the Gang of Eight, and the WarClouds discovering Rivers in the forest.

Hey Joe! Tell us a little about yourself.
I consider myself boring and dull.

It starts with “Not only is Joseph Carrabis a fellow Black Rose Writing and Book Fiends author friend, he’s an amazingly nice and generous guy. I am looking forward to meeting him in person in November, but right now you can get to know him a little better with my next World-building Showcase interview.”

The Mighty Phoebes (Steampunk author Phoebe Darqueling, for those who don’t know) asked me lots of questions, I fumbled through several answers.

The real kicker is where I wrote “I’m told that my work is so tightly written that it’s tough to remove stuff without throwing everything else out of whack.”

The Mighty Phoebes, proving the lie, pulled about four pages from my responses and you’d never know.

The Mighty Phoebes is a Mighty Editor, she.

Take a read, hope you enjoy, be sure to leave comments. She’ll like that.

Doesn’t matter the amount, only the helping

A Facebook friend sent me a post about Gary Sinise’s Foundation. I heard of it and knew nothing about except that it helps veterans and anything helping veterans gets a nod from me, so I reposted it to my timeline.

Another friend picked up the post on my timeline and encouraged me to investigate.

I did, and was in tears.

Susan and I decided to donate a portion of The Augmented Man‘s royalties to Gary Sinise’s Foundation. After all, the book deals with PTSD and recovering from trauma, Sinise’s foundation helps veterans overcome such ordeals, duh!, huh?

To our Brothers-In-Arms:
Those we’ve forgotten
and those we’ve tried to forget.

and in The Augmented Man‘s marketing material is the line “…the horrors of war never stay on the battlefield. They always come home.”

Anyone who’s experienced combat – real you’re-gonna-die combat – wants peace and rest. That’s what The Augmented Man is about.

So we’re giving part of our proceeds from the book in tribute to those who’re part of the story.

A Challenge to Other Authors
I’m told nobody starting out authoring today is going to get rich from it. I hope that’s not the case. There are some benefits to being rich. Detriments, too, I’m sure. I’ll let you know when I get there.

But I’m challenging other authors: Does your book deal with a social/cultural issue? Does your book’s story deal with people and/or animals suffering and demonstrate ways out?

Then make it real and help make it happen.

Donate part of your royalties to those who suffer.

Heck, even if your book’s not about such stuff, donate part of your royalties to making the world better for others.

I mean, you’re not going to get rich, right? Might as well do something with the few sheckles your making beyond supersizing those fries, right?

Award winning Enigma Series Co-Author Rox Burkey wrote an amazing review of The Augmented Man a while back (THANKS, ROX!) and recently followed it up with an interview for IndieBeacon Radio.

You can read Rox’s review on her blog.

You can listen on Spreaker and SoundCloud.

Then go buy the book.

While you’re at it, buy my other books, too. You wouldn’t want The Augmented Man to get lonely, would you?