It takes little for a child’s heart to fly. Mine, too.

Today would be a good day to fly kites. One of my favorite flying spots is a city park two towns away. It has a huge, gently sloping field that amplifies west-to-east winds. Stand at the bottom and it’s refreshing. Stand at the top and it’s noticable. Today the breeze rustled the treetops and made the leaves chatter. A breeze like this makes it easy to get my kites aloft.

The downside is that everybody uses the park. The city built ballfields and a playground on the other side of the parking lot and a big gazebo in the middle of the kite flying field. A friend caught one of my kites’ lines in the gazebo’s roof once and it took some good flying to get it free.

I could hear the cheers and catcalls from people in the ballfields – must have been some exciting games going on – and laughter and chatter from families on the playground. Lots of people but not many cars. People must have parked on the far side of the ballfields.

An empty parking lot is one of the things I look for, a good sign, it means the field will be open, plenty of room to run out my lines and fly a kite or two between the gazebo and the street. I’d already chosen my SkyDancer as the kite to fly. I walked down the field carrying it, its tails, lines and two ground pegs in my hands.

A man and boy had a little area set up on my right, between the gazebo and the parking lot. Not a problem, still plenty of room. A t-ball stand stood beside them, a whiffle ball rested on top, a broad, plastic yellow bat and several more balls lay on the ground next to it. The boy, a toddler based on his size, slightly awkward movements and shrieks of joy, threw the balls back and forth to no one. He’d throw one, go get it and throw it back to where he started then repeat the process all over again.

The man knelt on the ground, his eyes focused and his hands busy. It looked like he was rigging up a single line delta. I thought that a small, single-line delta would be more work than it would be worth but said nothing. I had the day off and wanted some time to myself. 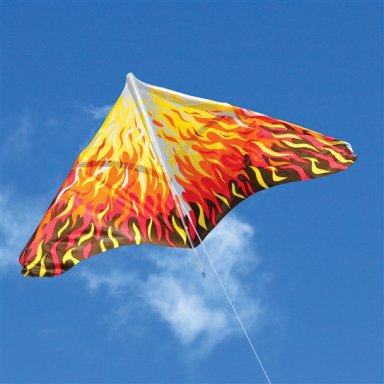 But the man wouldn’t give up. He’d get the kite up and he’d hold the line with the boy and let the boy take the line and the kite would come down and he’d go to work sending it back up.

I’d just finished driving my ground pegs into the earth and had walked out my lines, my SkyDancer still in its pack along with its tails, and something told me to offer them my Big Sled.

The Big Sled is actually a fairly small kite. I got it long ago. A local kite store was going out of business, I got there their last day, there wasn’t much left and I refused to go home empty handed. It’s more a kid’s kite than something an adult would fly, but I have close to one-hundred kites, kites for all levels of skill, all sizes of flyers, all types of wind and I love all kites. One more would round out the bunch so got it I did.

I went back to my car and got out the Big Sled.

The father was kneeling again, the delta in front of him as he adjusted the harness. I walked towards him. “Sir, excuse me, sir?”

I unfurled the kite. “This’ll be much easier to fly. It’ll catch the wind better and ride high on top of the wind.” 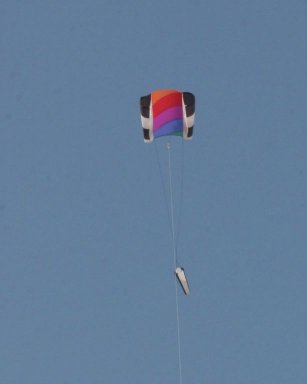 He was hesitant. “That looks like a professional kite.”

I laughed. “I’d never call myself a professional.”

He offered me his hand. “I’m Shane.” He had broad, flat palms. Thick fingers, calloused. A welcoming grip. A practical smile, open and evaluating at the same time. More laugh lines than frowns and deep brown eyes that took in all of you without leaving your face. He stood wide and solid with hair the color of his eyes and ruffling in the wind where it stuck out from under a green baseball cap. I took him to be a skilled laborer, someone both comfortable with himself and with tools in his hands, someone to whom making was automatic, without thought. He didn’t smell of resins or wires. Doors and walls, I decided. Not cars, there was no grease or grime under his nails or etched in his palms and a whiff of wood welcomed me as he moved. Not tanned, so a finish carpenter, someone who works inside, not someone who frames and builds houses.

Tyler, a cherub as only little boy toddlers can be cherubs, called out “Hello!” Thin but healthy, both well and goodly fed, with clear eyes and a trust because he’s a little boy and everyone should love him, because that’s all he’s known is love of family and friends and, it seemed, a mirror that would grow into his father’s easy good looks. He stood beside us comfortably, neither anxious nor wary, following his father’s focus on my hands, watching me stringing the line, his eyes full of joy and his father’s smile echoed on his toddler’s face.

I attached the line and handed Shane the line hoop. “It’s going to have a little pull, so hold the line with Tyler. Let him get a feel for how much pull it’ll have so he can brace himself for it.”

The father looked me in the eye, confused.

“Enjoy yourself. Have a good time.”

I went back to the SkyDancer and lines, strung it up and, as is my habit, talked to the kite, the wind and the trees. I was rewarded with some great flying and LineSong – the wind pulls the kite, the lines to tighten and the wind vibrates the string like a bow crossing a violin. The result? You hear the lines sing; LineSong.

It’s the wind letting you know it’s having fun, too, me thinks. 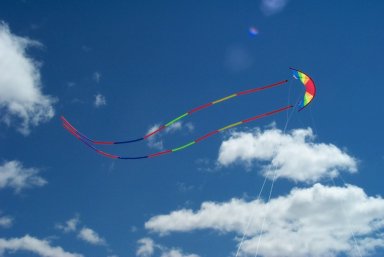 I flew for about an hour, maybe a little less. Now and again I’d hear Shane and Tyler laugh from the other side of the gazebo. I’d glance every so often and see the Big Sled high in the sky, swooping and swirling as the winds whirled it about.

I told the SkyDancer and Wind, “One more flight, girl. Come on down when you’re ready and we can pack up and go home.”

We had one more glorious flight. Some people had gathered so I had the SkyDancer live up to its name and perform a little ballet. The wind, as promised, grew tired, which was fine because I was, too. I brought the SkyDancer down and began untacking the lines.

Shane and Tyler came up to me. Shane had the kite against his chest, the line hoop and line in hand. “Thank you, Joseph. That was great. Tyler and I really appreciate your letting us fly your kite.”

Shane shook his head. “We can’t do that.”

“You and Tyler gave me a gift when I walked onto this field.”

“Tyler called out ‘I love you, Dad,’ and you called back, ‘I love you, too, Son.’ That’s a gift. The kite is small exchange for such a gift.”

Shane slowly shook his head, not quite believing. “Are you sure?”

His eyes narrowed slightly. He cocked his head a little to the side.

“Whenever you and Tyler don’t want to fly kites any more, or when you think it’s time, you pass it on to the next father and son, you give it to them as a gift because they gave something to you as a gift.”

Shane nodded slowly. “Okay. We can do that.”

“Pass it on. Pay it forward. That’s how it works.”

“Thank you. Thank you so much.”

They walked away and stopped. Tyler started running towards me and Shane called him back. They huddled for a moment then came up to me. “Tyler has something for you.”

Tyler reached up to me. I knelt down to be at his level and he gave me a big hug. “Thank you for the kite, Joseph!”

I put my arms around him, held his precious little body next to mine. “Oh, thank you, Tyler. You’re the man, Tyler, you’re the man!”

– Love each other while you can. There’s never, ever enough time. Never has been, might never will be. So please just make as much as you can of what we have left. – Damien on Patreon

One thought on “Shane and Tyler”