[[Note: this originally appeared on the Discover the Practice website]]

Some people know that the modern Santa concept (heavy male, white hair, red suit, et cetera) was created by the Coca-Cola company as part of a marketing campaign; Coca-Cola wanted to get children as a market but were forbidden by law from directly marketing to them. Their solution was to create a character that benefited children (gave gifts) and the children in return would reward this giftgiver with a bottle of Coke. So we weren’t marketing to children, but if those kiddies wanted to get gifts…

The nearest “historic” Santa was the 19th century Bokkerijders, a group of Belgian laborers who performed Robin Hood like acts. The church denounced their activities as Satanic although the poor appreciated waking to gifts of food and money on their doorsteps. Prior to that, a St. Nicholas myth comes from the Slavic countries. There, St. Nicholas had a “Dark Helper” who was dressed in black, had horns and pointed ears, all based on Santa’s shamanic origins.

A common belief is that the first historic Santa was St. Nicholas of Myra, a Greek bishop from the 4th century AD. Nicholas of Myra made a habit of secret gift-giving, a nod to today’s “Secret Santa” office parties, perhaps. A fascinating aspect of this is that modern Vatican research indicates there never was such a person and that the concept was probably adopted from pagan beliefs. 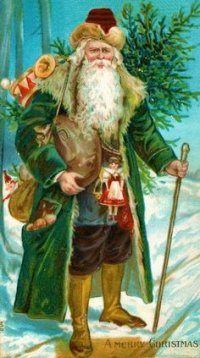 The Winter Spirit
But Santa’s other names, such as Kris Kringle, Sinterklass, Frost and such, come from cultures where Santa was an elf at best and an unpleasant (or at least fickle) entity at worst, and each culture painted him slightly differently. To some he was tall and dressed all in green, to others he was angelic and dressed in white and the Scots Gaels envisioned Cailleac Bheur, a frost laden giantess (cyclopian in some stories). In some cultures the Santa Spirit rode a single reindeer or elk or large white horse (often Odin’s Sleipnir and going back to when Odin was Wodan), in others he flew on the backs of geese. “Coming down the chimney” hearkens to a time when spirits were welcomed at the hearth and leaving sweets – sugared milk, cookies, candies, etc. – were typical elf offerings. 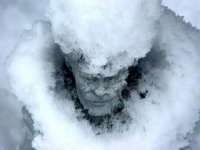 What many people don’t know is that these and related beliefs in a specific gift-giving Winter Spirit (traditionally harvest products and bounties) goes back 40,000 years (according to some research) and isn’t specific to any one tradition. Some native american people tell stories of Winter Man, a hunter/provider spirit that tells them where and when the herds are migrating thus providing food throughout the winter.

The Christianizing of the Winter Spirit
One of NextStage’s Principles is “Faith is with the heart, but confession of faith is with the lips.” One interpretation of this is that individuals must believe something before they’ll admit and/or act on that belief. It’s not enough for someone to intellectually know something is true, until they believe something is true, they’ll hesitate before admitting or acting on that truth.

The church knew this quite well and used it extensively when sending missionaries into new territories. One way this was played out was by the church christianizing the beliefs, ceremonies, rituals, et cetera, they encountered. What better way to convert people than to encloak the church’s mysticism in already familiar mysticism?

The Virgin Mother, for example, is the christianizing of The Goddess (and if you really want to blow your mind, do some research on ancient Hebrew texts. That fifth commandment, the “Thou shalt honor thy father and mother” one? The original language was “Though shalt honor thy father in heaven and thy mother the earth…”. Imagine how much history would be changed if that original language became dominant in western culture!). The concept of Jesus hanging on a cross, pierced in the side with a criminal on his left and right was easy for pagan Europeans to accept; they knew the story as Wodan hanging on a tree, pierced in the side with his guides, two ravens, on his right and left. 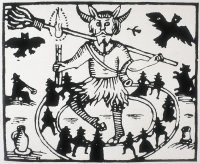 But the Winter Spirit was willing to punish as well as reward. Have you heard of European Santa Claus traditions wherein a not-so-jolly old elf leavs coal or stones in children’s shoes? That’s one way the old beliefs are still with us. The original myths varied in person and place. The British Isles’ Robin Goodfellow was known to abduct a child or two, especially if they’d been bad since his last visit.

That original Winter Spirit who sometimes abducted children, sometimes punished them and sometimes left rocks or coals? He was still useful because you can’t steer people towards benevolence unless you convince them the alternative is malevolence.

The Dark Elf
Many European winter traditions have a “Dark Pete”, “Black Pete”, “Zwarte Piet” or similar character associated with them. This character became Santa’s “Dark Helper” who came in Santa’s wake to dispense justice (originally), fear (in later myths) and currently as a hapless jokester/prankster/trickster character (readers familiar with Trickster stories will recognize Dark Pete’s antithetical Santa aspect). Amusingly, it is this Dark Elf from whom we get many of our Santa Claus concepts; he wore furry garments, was bearded, traveled mainly in winter and carried a large bag of gifts…or stones. 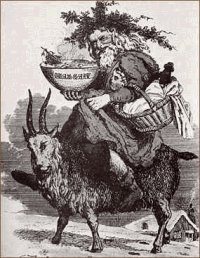 The Dark Elf still makes appearances in many holiday celebrations although you wouldn’t always recognize him as such. Denmark’s Nisser are gnome-like characters who’ve traded their scary ways for festive red stocking caps. Sweden’s Tomten rides a goat, a call to the original Dark Elf’s having horns and being beast as well as man. Perhaps the most famous (albeit still christianized) Dark Elf is the Ghost of Christmas Present from Charles Dickens’ A Christmas Carol; long flowing robes, exposed, muscular chest, crowned with holly (a fertility symbol), bearded, horned (although mixed with the crown in many renditions) and bringing both cheer and shame. 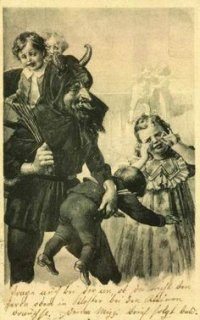 Recently popular culture has seen a resurgence of the best known modern form of the Dark Elf, Krampus or Grampus. Now directly used to terrify misbehaving children (as well as a foil in many direct-to-dvd christmas horror flicks), Krampus/Grampus is an half-man half-beast, huge by human standards, horned, hairy, wild and with red flaming eyes. This Dark Elf form not only punishes children, he does everything from steal their presents to devouring them!

Shamanic Origins
It is also amusing that this modern Krampus/Grampus character (along with its variants such as Klawes, Ashenklas, Pelsmarte and the female forms of Berchte, Budelfrau and Buzeberght) most closely physically resembles Santa’s shamanic origin as the wiseperson in the village who knew how to talk with the Winter Spirits and share their messages. Most of these intercessors knew they were communicating with ancient spirits of the earth and would dress the part, donning antlered or horned head dresses and furred robes, and carrying bags of offerings to the winter spirits and returning with bags of beneficence from those same winter spirits. Elements of these shamanic origins remain with us in the shapes of certain European holiday cookies. That gingerbread man with the holiday trim originated in speculaas cookies that quite clearly showed Santa’s shamanic aspects. 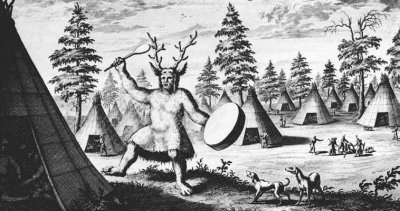 So Santa as we know him today goes back from Coca-Cola to Thomas Nast’s Bavarian ancestry based Saint Nick (modeled after his home country’s Dark Helper and for Harper’s Magazine) to Boyd’s Dutch-based illustration for Clement Moore’s poem (with both Boyd’s and Nast’s illustrations showing Dark Elf symbolism) to the christianization of Winter Spirit myths to the shamanic practitioner communicating with those same winter spirits to help his or her people.

Enjoy your holidays, folks. They go way, way back.

You can find out more about Santa’s shamanic origins here (be sure to look at the provided lists, not just the main item).

One thought on “Santa’s Shamanic Origins”