There is no pity in The Wild, only Balance

I’m sitting on my backporch working. When the warmer weather hits, this is where I spend most of my time. I can see the woods behind our house, feel the sun on my bones, watch the bluejays, robins, orioles, cardinals, hummingbirds, nuthatches, morning doves, pigeons, squirrels, chipmunks and other assorted backyard denizens at the birdbaths, feeders and water buckets we leave out for those I call The Old Ones.

I call animals The Old Ones because of my time studying anthropology. All the aboriginal peoples I’ve studied have views of wildlife that differ from those of most modern people and aboriginal views have rubbed off on me. Case in point, I’ve made friends with several generations of raccoons, turkeys, deer, skunks, opossum, woodchucks, beavers, fox and owl over the years. You can see many of them under WildLife.

Even with the animals I’m friendly with, I still know they are wild. Many take food from my hand but none of them are tame, none are domesticated. They are wild.

One of the rules of The Wild is that nothing dies of old age in The Wild. It just doesn’t happen. Animals grow old, grow tired, can’t move as quickly, can’t move as well, get injured, can’t get at whatever seed or bread or foodstuffs they can find and, in the end, even predators become prey. 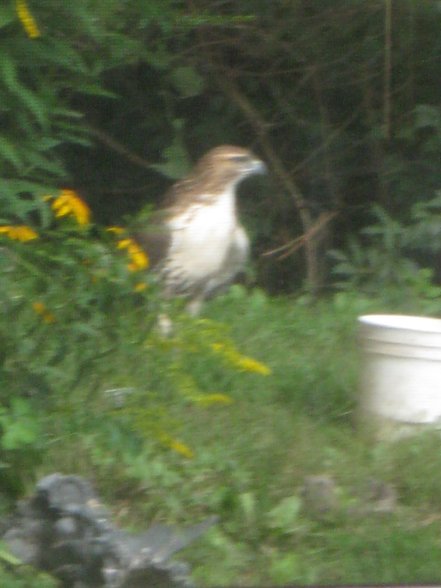 Even in my little backyard, backing up to many woodland acres, I’ve occasionally seen scatterings of feathers where Sam and Aris, our mated hawks, have caught something too slow at the feeders, and seen the remains of chipmunks, voles and mice in Bart the Owl’s pellets. 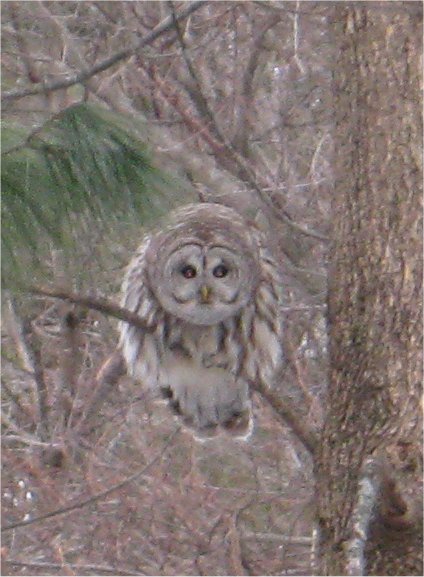 Because I work quietly and prefer to listen to the sounds of The Wild (and sometimes Bach) the animals tend to ignore me. Sometimes all those around the feeders and water buckets will jump and flee and I’ll catch site of Reynard’s (a male fox) bushy red tail as he hurries back into deeper cover. I know he and his mate have kits to feed and don’t begrudge him his time hunting in my yard.

But today I noticed a pigeon hopping among the flock that visits our feeders. Definitely hopping, not just oddly walking. I stared and noticed this pigeon had one leg, hence the hop. But there was something else odd.

There was something strange in its tail feathers. It could still fly. It was a little awkward getting airborne, true, but it could still take flight when the others scattered. It was one of the last to leave the ground, though.

I stared then picked up some binoculars I keep beside me on the table. The strange thing in its tail feathers was its other leg. Broken, twisted, how it got pegged in that position I don’t know.

I know animals can feel pain. I’ve read the studies. I know. I also noticed that the male pigeons, the ones perpetually strutting and harassing the females at their seeds, were leaving this one alone. If anything, they knocked it over in their quest to show their plumage to some other female.

This wounded pigeon would flap its wings and get back up. Sometimes that broken leg would get in the way of the wings and the pigeon would open its beak to make a sound I could not hear.

But my ears are not those of Reynard who has kits to feed.

And suddenly the other pigeons scattered, the chipmunks dashed into their holes, the squirrels scurried up their trees, the bluejays and robins and orioles and cardinals and others went to each and every compass point.

And Reynard stopped to look at me, the pigeon in his jaws, its one good leg still kicking, its head still bobbing, its beak still open making sounds I could not hear.

Reynard bowed his head, turned and trotted into the wood. I, transfixed, had stopped breathing but for how long I didn’t know. My chest was tight. I was sickened and relieved and had not moved.

A moment later and the wildlife returned. My breathe relaxed. I turned back to my computer and started to write.

This post originally appeared on the now defunct An Economy of Meaning blog and was reprinted on Discover The Practice.