I don’t know how many people’s accounts are locked and suspended because they tweeted in Danish.

And yes, because I tweeted in Danske (Danish).

Oh, the (lack of) humanity!

If you’re following me on Twitter, you may have noticed I upped my game over the past few weeks. After being off Twitter for much of Covid I got back on and began exchanging quips with folks in my stream.

Kys Kys
Then Twitter locked and suspended my account and blocked my access because I wrote “Kys Kys” to a friend in Denmark who’s teaching me Danish via Twitter. “Kys Kys” is Danish for “Kiss Kiss.”

I especially love the line “Please know that there are people out there who care about you, and that you are not alone.” Evidently none of these people are at Twitter.

And let’s not get into the poorly constructed sentence.

Evidently “Kys Kys” has meanings other than “Kiss Kiss.” Specifically, “Kys Kys” has something to do with encouraging suicide and self-harm. According to the Urban Dictionary kys

Stands for “Kill your self” a sarcastic term used amongst friends basically telling one another to shut the fuck up, when someone says something ignorant, embarrassing, or just plain stupid. *not intended for real suicide suggestions, please stay alive y’all…

Robots Go Where Humans Are Too Stupid to Tread
It’s obvious my KYS was caught by some robotic dolt and the issue should have been resolved quickly. I emailed Twitter explaining KYS is Kiss in Danish. I alerted them to their…error? stupidity? idiocy?…and suggested they review the exchange between my Danish friend and myself. A week’s gone by. Twitter claims they’re investigating: 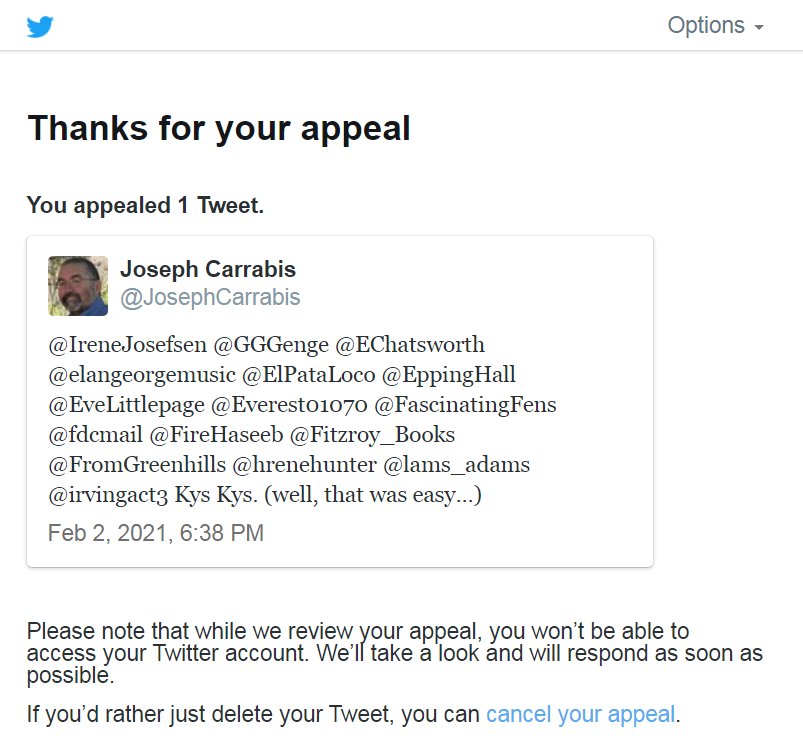 I swear this is true. I’m a fiction author and I couldn’t make up something this inane (although it’ll show up in a future work, I promise you).

The Universe seems to be telling me “Thou shalt not twit!”

At this point, who am I to argue? I’ll start up again if Twitter unlocks my account. Maybe. I’ve never dealt well with stupid, and to me this is wildly stupid.

I will miss all the fine folks I knew there and hopefully they will find me if they wish. It would be nice to have my friends around me again.