About the Author
Matt Nagin is an author and comedian who has published four books, acted in numerous film and TV projects, and performed standup in seven countries. Some career highlights include the 2019 publication of his humor book Do Not Feed The Clown by Tenth Street Press, the poem If We Are Doomed winning the 2018 Spirit First Editor’s Choice Award, and an appearance on the Amazon series Hunters in a scene with Al Pacino. Matt’s fiction has been published in Across The Margin, The Binnacle, and Void Magazine, among other markets. Other experiences Matt is grateful for include performing his one man show Woolly Mammoth Panic Attack at The Edinburgh Comedy Festival (a show so licentious it almost gave his mother a stroke), and creating the short film, Inside Job, which won several awards at festivals. Finally, Matt spent several years as a Talent and Show Coordinator for The Gotham Comedy Foundation, a charitable organization that brings comedians into hospitals and senior centers. More info at mattnagin.com and
TWITTER
IG
IMDB
YOUTUBE
WRITING
GIGSALAD
THE BASH 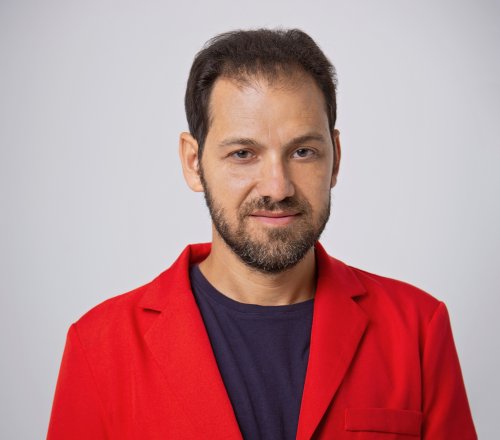 How the stories came about?
It was August 2020. I had recently gotten over a bad case of covid acquired while living in New York City. I had moved down to Alabama for the summer to be with my girlfriend. While there I watched a bunch of news and finance shows. What I observed, among other phenomena, was a reckless disregard for human life. Everyone seemed preoccupied with turning a profit. The other key element I found very interesting was that in this time of total panic, when the economy had been shut down, the stock market was going up. And not just a little up. It was booming! This made no sense ! It seemed the biggest bubble I’d ever seen!
It was in this backdrop that I wrote “Whose Pandemic Is It Anyway?” Since there was so much artifice in the world at the time I thought I could satirize it well through an over-the-top game show host who profits off the death and destruction of the pandemic and gets others to buy a piece of this devastation too. There are many issues this story tackles such as what Mattias Desmet calls Mass Formation Psychosis (this is before I knew of his work but the story seems to identify a similar phenomena), the often fabricated nature of mass media, the creation of a bubble economy by the Fed etc.
I realize this is a lot to conquer in a short story. But the subject matter seemed very compelling. I only wrote two drafts or so followed by some fine-tuning. It was not something that took me a terribly long time to complete. That said, I really connected to the situation these characters found themselves in and I hope others will too.

Opening
Eduardo Ramirez, formally Ed Brooks, examined the vast studio audience, lifted his hand operatically and shouted “ARE WE READY?” The crowd went berserk. Every last member stood, hooting and hollering, stomping feet, making weird faces, beating fists against chests, raising chairs into the air triumphantly.
Eduardo was the ringleader, the maestro to this sick, twisted orchestra, and more than that really—some way out of societal programming—a white-out to all of human error—the carrier of the olive branch—the disruptor of endless stupidities. He was what they needed, what they lacked, and he knew this and played into it since it had a very positive impact on his Nielsen ratings.