Before getting to the great opening line itself, some notes on the book as a whole.

I started this book before the US Supreme Court demonstrated that great legal minds can also be idiots. That demonstration occurred half way through my read.

Before, I thought the book brilliant and profound. After, even more so.

Before She Sleeps is rich with some of the most beautiful language I’ve ever encountered. Often reading beautiful phrasing can throw one out of a book because the phrase stops the reader so they can savor the author’s eloquence.

Not so here. The language is universally rich, so much so that the over-the-top brilliant passages merely hurried me along to read more.

I will offer the book ended too abruptly for me. I can accept the ending as written, everything is tied up, no loose ends, and I would have preferred it to linger a bit longer so I could bid the characters a better farewell for the joy they gave me.

Now to that great opening line. 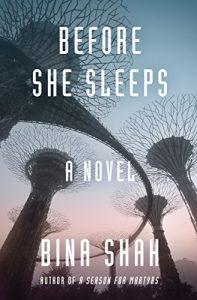 “From The Official Green City Handbook for Female Citizens: No citizen is permitted to write or maintain a personal journal or diary.” – Bina Shah‘s Before She Sleeps
Scene, tone, atmosphere, mood, setting, tension, and conflict in twenty-two words.

From The Official – Whatever this book contains, it’s meant to be authoritative. It’s Official. There will be penalties of some kind for going against what’s written.

Green City – I love the juxtaposition of “green” and “city.” Green usually implies growth, outdoors or indoor cultivation, and nature of some kind. But here it’s the name of a place, “Green City.” A cultivated city? Green-thinking city planners? Then a recent or future development of some kind.

Handbook – whatever this book contains, it’s meant to be easily transportable, perhaps always available, carried in a pocket or purse or pack. It is a handbook. It is meant to be kept at hand.

for Female – big whoa! with this one. Society is somehow segregated. These rules only apply to women. What societal, environmental, et cetera, forces are at play such that women have rules specific to them?

Citizens: – a further segregation; citizen and non-citizen. Is there a test? Is it an age thing? At what point is citizenship conferred?

No citizen is permitted to write or maintain a personal journal or diary. – and here is the killer. Writing is okay, so long as it’s not personal observations of one’s life. You may be a citizen, but you’re still regimented and your individuality, your personhood, is denied.

Did I say Whoa! yet?

This opening line sets the tone, atmosphere, and mood of the story so cleanly and eloquently. It is both beautiful and impressive in how much information it conveys in its brevity. Read through the book and the power of Bina Shah’s writing keeps you moving through its sometimes depressing, often surprising, pages.