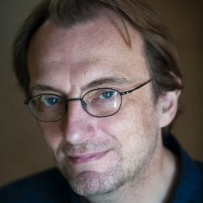 Have you (speaking to the authors in the audience) ever encountered a piece of writing so beautiful, so evocative that it shuts down your internal editor and draws you in? So well written that it’s only after you’re deep in the middle of it you realize the effect it’s having on you and say to yourself, “I’ve got to analyze how s/he did this. This is incredible.”

So it is for me with Richard Panek‘s Climbed a Mountain, Saw a Comet, Defined the Far Parameters of the Visible Universe. I was going through old files on my computer and saw a file listed as “Example 22KB 10/21/1998 9:08:20AM”. No extension, not even a full eight character name (that indicated I probably saved it when there was an 8.3 constraint on file names (ask your grandparents if you don’t know what 8.3 means)).

this is an example of excellent writing, I think

I opened the file and read the first line, “this is an example of excellent writing, I think”.

Okay, the me of some twenty years ago liked this piece. Enough to save it for personal posterity.

Sometimes I amaze myself with my presaging ability.

But What Makes It So Good?
A worthy question, that.

For me, it starts with the title, “Climbed a Mountain, Saw a Comet, Defined the Far Parameters of the Visible Universe”. This is a wonderful transition from the sensory into the mythic; Climbed a Mountain, something many people have experienced first-hand or via mass media. In all cases, the familiar. Except that climbing a mountain has mythic connotations in all societies/cultures (with which I’m familiar, anyway). We climb Olympus, Asgard, Kailash, Etna, Hara Berezaiti, Taranaki, … the list is quite long, thus in the first three words the reader is given an invitation.

Saw a Comet, fewer people have first hand experience. Plus we’ve leapt from the earth to the sky, continuing our mythic journey not to mention that comets also have their place in world mythologies.

The final part, Defined the Far Parameters of the Visible Universe, combines the mythic with the sensory. We’re still going into the mythic and we’re going to get there with science, the ultimate in sensory systems because everything is measured, everything is certain, everything is explained.

and you have it, except such a concept is confusing to most people so the brain goes into acquisition mode to get rid of the confusion, your brain opens you up to the information presented in the hope that the confusion will disappear. This confusion is continued with the second part, “the most breathtaking observatory in the world”.

Consider the first paragraph, “The dormant volcano of Mauna Kea on the Big Island of Hawaii rises 13,796 feet above sea level, and then it rises a little bit more: the domes and dishes of the nine telescopes that crowd the several acres at the summit, as if straining for a better view of what’s out there. Individually, even an observatory six or eight stories tall isn’t necessarily impressive, at least not here. Each one may come as a fresh surprise as it ranges into view, a blaze of white against the deep blue of the thin atmosphere or the rich lunar gray of the volcanic soil. But in this queer landscape, where the only scale of comparison is an immense and indifferent sky, it’s in the aggregate that these structures begin to assume gargantuan proportions. Two here, three more up the road, a couple others on a distant ridge: It’s the behemoth-after-behemoth audacity that lends the observatories atop Mauna Kea their lunatic grace. They’re like an elephant graveyard: It must mean something that so many of them are here.”

The paragraph continues blending mythic with sensory imagery and validates our confusion with the last line, “It must mean something that so many of them are here.” Panek’s writing has worked hard (albeit beautifully) to get us here, to this point, and now he’s externalizing the question we’ve been building up since we first read the title.

I’ve read through the whole article at least once recently and obviously at least once in the past. What I pick up now I may have felt but not recognized twenty years ago when I put this piece in my “Good Writing Examples” collection.

This piece (to me) gets its power because it mixes lots of sensory (what you see, what you hear, what you feel) details with lots of responses to the experiences described (the height of Mauna Kea, the domes crowding…straining to get a better view. I have no idea if Panek wrote this in one burst or it went through twenty-five rewrites before he handed it in.

I do know that right now, where I am in my writing, to write something like this I would need to slow down (I’ve slowed my typing even now, paying more attention to my intention than just getting the words down), to savor the experience I want to communicate in order to share it more fully, more completely, and that means paying attention to every detail.

One thought on “An Analysis of Richard Panek’s “Climbed a Mountain, Saw a Comet, Defined the Far Parameters of the Visible Universe””