On a desert island with a good book, a good woman and maybe Matt Damon because he knows how to grow things to eat 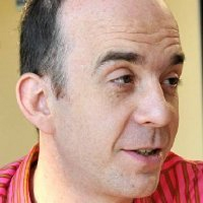 Hello all and welcome to our continuing series of author interviews. Today’s guest is Human StarPilots author and international educator and consultant Fabrice Rigaux.

Being bilingual and bicontinental, Fabrice brings years of multicultural understanding to his writing and demonstrates his knowledge of differences and similarities to his debut novel (and we hope others). I’d like everyone to stand up and give Fabrice Rigaux a big round of applause for taking part in our exciting adventure.

I started to write in 2016, using the courses I give to build the first book. It was in French and about Purchasing IT.

Fabrice’s Bio
Fabrice was born in the USA and is an American and French consultant in Information System and Technology who lives in Macon, France, with his wife and two children.
Fabrice has worked exclusively in an international environment often serving as a bridge between US and European cultures. In addition, Frabrice regularly teaches at the university and professional levels.

Writing has always been a dream!

Fabrice and I talked about my poor French, the influence of great writers, being an academic, teaching people how to cope with unexpected IT problems, AI, having a dream and achieving it, being responsible for our actions, working in a future world, being stranded on a desert island with your wife, working in Oz, being quiet but not boring and dull (that’s my job), living plainly, Fredric Brown’s “He was the last man on earth and someone knocked on the door”, critiquers and first readers, his father’s influence on his writing, what characters will do to get into a story, the value of outlines and more.

As a reader, I do love science fiction stories that are very tight.

An excerpt from Fabrice’s Sequel to HUMAN STARPILOTS

I have to outline. I need it. And I write a paragraph at a time.