This border hopping Indie Author is a fan of WADsworth 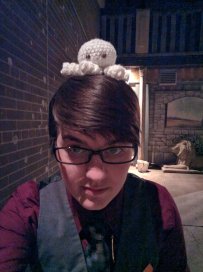 Hello all and welcome to our last author interview for 2018. It’s been fascinating and full of learnings for me, so thanks to all who took part.

The first thing you need to know is that A.N. is an amazingly patient individual who graciously sat through three intro takes because I kept botching things.

And there’s still of few goobies in there. It’s me, folks, all me.

I’d like everyone to stand up and give A.N. Mouse a big round of applause for taking part in our exciting adventure.

I will be a surprise to absolutely no one.

A.N.’s Bio
A.N. is a Canadian indie author living in Milwaukee who primarily writes fantasy work with various side dishes: adventure, romance, dystopia. A.N. is also an academic editor, though that’s less of a love and more of a ‘what pays the bills’. Lastly, A.N. is part of an author coalition called Words After Dark, and we have a lot of fun putting out books and connecting with readers.

We decided to be a team and help each other.

A.N. and I talked about his recent marriage, his work with Words After Dark as editor, publisher and author, co-authoring with his husband, Ace Layton, falling in love over the internet, Milwaukee, the Niagara region of Canada, being an academic editor, being a content editor, working with other authors to improve their work, the differences between academic and fiction editing, different ways of being accomplished, the benefits of networking with other authors, looking at one’s writing critically, getting characters onto the page, conventions, hosting panels, going all out celebrating the release of one’s first novel, bad things happening because that’s how one makes plot, cosplay and more.

I read a lot of different material and I have a knack for remembering really obscure trivia.

I help authors pull out the ideas they’re trying to express.

I always want to have the smallest list of accomplishments in the room. I like to be surrounded by people I can learn from.

I published it around a date when I already had something planned. Ace and I went to a concert. It was a great adventure.