I reviewed William Noble’s Make That Scene on both Goodreads and in a bit more detail on my blog. That book was a gem, so I picked up Noble’s Shut Up! He explained and settled in for some good learnings.

Truth is, I’ve read the book twice in two years and will easily read it twice if not thrice more in the next few years. It’s that good.

Truly amusing to me is how little I retained from my first read. Of all that’s in the book, I locked on the gem about having characters ask each other questions to keep dialogue interesting, engaging and moving. Probably because I was writing lots of dialogue for a work-in-progress, Ritchie and Phyl (A Celebration of Life). That wonderful piece of advice became my big hammer for several dialogues in several works-in-progress. It’s an incredible tool all by itself and worth the price of admission.

But that, as noted, was what stuck with me from my first read. My second read had me dog-earing pages starting at 5 and several pages in each chapter thereafter.

For authors working on realistic, believable character exchanges – the book covers more than dialogue but dialogue is the main focus – it’s a must. 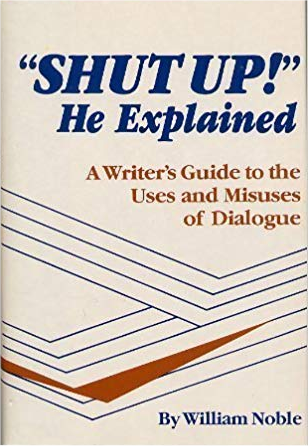 Various Gems
The book is full of “Duh!” moments, things that are obvious yet never seem to get down on the page, Example: Dialogue must move a story.

Obvious, right? But now apply it:

“You live around here?”
“If you want to call it living.”

The first is boring, the stating of facts and without movement. The second shows emotion, attitude, possibly challenge and moves the story because now the reader needs to know “Why the attitude?”

And those are the quick finds, not an extensive list.

Speaking of lists, “Shut up!” He explained has many. Here’s a sample of one list that become part of my dialogue bible:

You’ll notice item #1 in the above list was my original (and only, idiot moi!) take away from the book. Imagine how quickly the plot would move along, motivations would be revealed, characters would be defined, et cetera, if you used #2 a bit more!

One big plus is that every page has examples of what Noble suggests, including demonstrating something done poorly and how to make it better. Imagine! You can practice and learn by example! Who’d’a thunk it!

“Shut Up!” He explained is one of those books that benefits authors at any stage in their career, me thinks. It’s definitely staying handy on my bookshelf, dog-eared and highlighted for quick reference. Until I take it down for another thorough reading. And learning.