She’s such a good mother

I mentioned a while back that Hecate showed signs of being kitted.

Do I know my raccoons or what?

This video is four segments shot within a few minutes of each other. Hecate’s five kits (prolific, ain’t she?) didn’t all get into the frame simultaneously. One would race forward, one would dart back. Two would go to the water bucket, two would come to get peanuts.

The joys of surrogate fatherhood.

Anyway, more for us to be proud of.

The one kit who always comes forward no matter what is either Clyde or Brutus. He hasn’t decided on his name yet. He’s darker furred than the other kits. And he likes to nibble toes. Mine.

There are no egos in The Wild. Not for long, anyway

For about a week, Gracie and Hecate didn’t dine together. Regular readers may remember our previous post about these BFFs and we were concerned when we’d see Gracie or Hecate for a bit. Then one would come, not the other.

Not sure what happened.

Did these BFFs have a falling out?

Overlapping territories easily occur with different species when they require different resources; a turkey and a raccoon don’t go after the same food supplies.

This brings us to another territorial constraint; same or similar resource requirements. Example: two relatively equal predators usually don’t mark out the same territory. Unequal predators – fox and bear, for example – will have overlapping territories and you know the fox isn’t going to challenge the bear for a bit of food.

In any case, the rules of The Wild make good precedent for us Two-Leggers: Respect your neighbors. Clean up after yourself. Share when you can. There are no egos in The Wild. There can’t be. Egos are expensive and never worth their cost. Rules are simpler in The Wild. There are no empty threats; if Old One A shows a territorial display and you insist on invading A’s territory, A will respond with force to get you out of its territory. Two-Leggers are always making empty threats, most times because they don’t know what’s their territory and what isn’t; the border between selfish and selfless is poorly defined or doesn’t exist at all. Ego kicks in and attempts to create a territory where one doesn’t exist.

And Gracie and Hecate are together again. The borders are intact. We’re glad.

Besides, they were probably off visiting friends.

Early one recent morning I became privy to an intense conversation taking place in our backyard.

Can you tell I’ve been reading lots of early 20th century authors?

Anyway, this fine morning, the stars still out and the sun yet to shrug off sleepiness, an intense conversation.

No conflict, no raised voices, no threats, simply two friends enjoying each other’s cerebrations over a good meal.

Have you ever had that joy? Being with someone you love and admire, someone who’s intellect alone brings you joy, someone whose each word opens vistas previously unknown to you?

It is also, for me and alas, a challenge to find. People are often too opinionated. They state what they heard, not what they know. They don’t question information so much as naively accept it as if it were inscribed on the Third Tablet from Mount Horeb.

I don’t mind opinions so long as the opinionator understands I may have one that differs.

It is in the differences that we learn.

It’s nice to find refuge in those of a similar mind, similar opinion, yes.

How much more glorious to find refuge with those with whom you disagree? To know that here there is safe argument, there is welcomed dissent, to be envigored in the arms of mutual respect, concern and a desire to understand all viewpoints, …

And now the kicker; to agree to disagree and still be friends.

This is prevalent in The Wild, as witnessed by Cuthbert and DeHavilland.

Enjoy your discussion, friends. I can but sit and admire.

PS) DeHavilland is the shy one.

Observe Hecate and Gracie. Hecate’s on the left, Gracie’s on the right. The video below is in two parts with several days in between.

Hecate always comes mid afternoon now and I wrote about the significance of such. What’s interesting is that she’s made friends with a turkey.

But a young adult hen (we’re still in doubt about Gracie’s gender, truth be told. She’s starting to show some male traits. Steroids, we think) and a mother raccoon? Hmm…

They’ll come into the yard separately, see each other and with a few clucks and chortles of greeting, begin dining side-by-side.

They pity us, I’m sure. All humans are the same species and we can’t make it work.

The other day we noticed some new behaviors. Hecate, shortly after she arrives, sits back and stares into our backroom to get our attention. Failing that, she’ll come up on the porch and walk back and forth. Failing that, she’ll (I’m not kidding) come to the back door and pound on it. Okay, scratch at it. To her, I’m sure she’s pounding.

The new behavior involved Gracie. Not having any fresh seed, she came to one of the windows and stared in, clucking. That failing, she walked back and forth on our porch. Failing that, she… 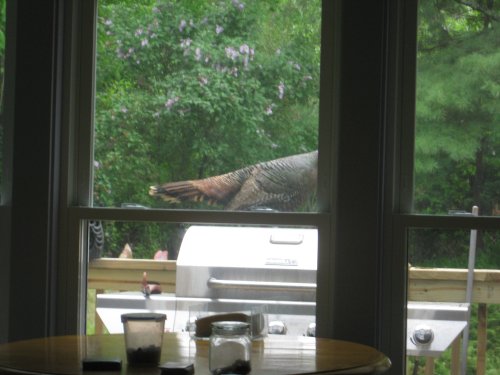 Truth be told, I was so involved in work I didn’t notice her until I saw our cat staring at her.

But it doesn’t end there. Gracie and Hecate both stare at us now. Gracie clucks and fluffs and spreads her wings to get our attention. Hecate incites her, “Do it again. I think it’s working.”

Regular readers know we’ve been working with raccoons almost ten years at this point. This first mention in this blog is Raccoon Mother Hecate back in 2017 in Heckie, Sheldon, Veronica, Porgy and Bess (the second post I published, in fact. That’s their importance in our lives).

Some eight months later Hecate introduced us to her second generation kits documented in We Got Kitted!

Our first encounter with Raccoon was Rockalina. 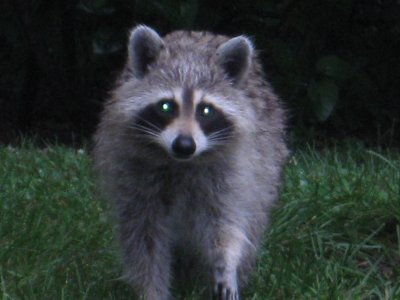 The above image is dated 6 June 2010. Rockalina aka Rocky came out from our pines foraging midday. Strange behavior. I worked on a porch back then and, seeing her, talked to her. She stop and look at me for a moment then continued foraging. A week or so of talking and I noticed she’d come and look for me. I got off the porch and approached her, always talking. She came up and sniffed me. I brought out some old cookies we weren’t going to eat. She cautiously took one. I put peanut butter on crackers. Big hit. I made peanut butter sandwiches. Bigger hit. We had tiny dog bones. She loved them.

She would come by at 3-4pmET every day and stand up until I noticed her, talked, and she’d come forward to get her treats.

We thought it odd.

Then one night our back light came on. There was Rocky with five kits, all standing up waiting for me to come out.

She was such a tender soul. I miss her greatly.

She also brought her sisters and aunts and daughters, who brought their kits. One year we had 19 raccoons in the backyard, most of them taking food from my hands.

And it all started with one raccoon coming by in the afternoon.

If you get tired, learn to rest, not to quit. #quotes