Like a tightrope. Around your neck. Cutting off your air. Your eyes popping out. Your brain screaming for oxygen? That’s what you want your readers to feel.

Noun: tension
1. (psychology) a state of mental or emotional strain or suspense
2. The physical condition of being stretched or strained
3. (literature) a balance between and interplay of opposing elements or tendencies (especially in art or literature)
4. (physics) a stress that produces an elongation of an elastic physical body
5. Feelings of hostility that are not manifest
6. The action of stretching something tight

Verb: tension
1. Put an object in tension; pull or place strain on

Have you ever read James Blish’s short story Surface Tension (originally published in the August 1952 Galaxy Magazine and muchly anthologized)? It deals with people striving to break through the surface of water. Any liquid creates a surface where it meets something other than itself. This surface creation is why two drops of water meeting bond into a larger drop rather than staying separate. The permeability of the surface is called “surface tension”. Doesn’t seem like much of a story, does it? People? Water? 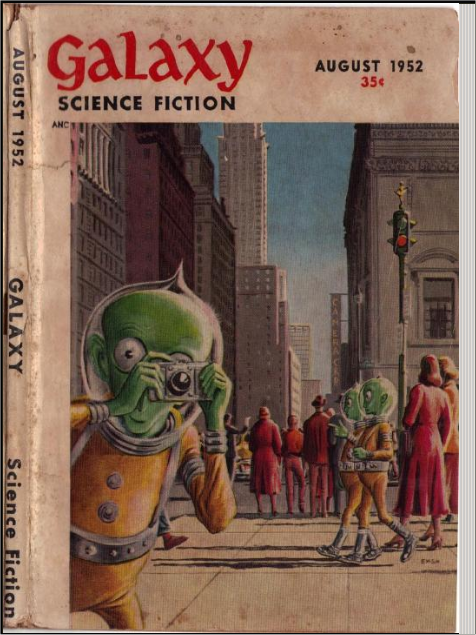 Well, allow me to differ; It’s a hell of a story (I’ve read it several times) and the title is a wonderful play on words. It’s an amazingly tense, thrilling story.

About people breaking through the surface of water? Really?

Yes! Blish’s Surface Tension is about people in a savage environment they can’t control (causing emotional strain) but do have the intelligence to overcome (causing mental strain, and both from definition 1 above).

All the time these people are working at breaking through the surface of water, they have to deal with non-human enemies that aren’t always right in front of them, that use stealth, camouflage, that aren’t always obvious. Things get even more tense because the people also have to deal with non-human allies who aren’t always reliable, who have secrets of their own and their own agenda for the people. There’s more than enough hostility (5) to go around, it’s who to aim it at that’s not clear.

Some of the people want to deal with this water surface challenge one way, others another way, some don’t want to deal with it at all, these people have been left with instructions but not the complete set and problems escalate as the story progresses. There’s opposing forces from within these people themselves (that covers 3).

All that’s left is “6. The action of stretching something tight”. That’s what happens to the reader, who is stretched tight wanting to know how the story ends.

All the elements of tension are in that story. Check it out.

What’s important about Tension?
Thriller author Karl Braungart has a sign over his desk: No Conflict, No Story

Whatever type of tension you choose, it’s going to be demonstrated by conflict. In my novel, The Augmented Man, the main character is in conflict with lots of things but more than anything else he’s in conflict with himself. The tension in the novel (people tell me it’s quite tense. Even the people who’ve read it several times) comes from not knowing if that main character will overcome himself to save himself (not to mention all the nasties he meets along the way).

My god, it don’t get much better than that, do it?

The reason readers care about The Augmented Man‘s protagonist, about Ishmael, about Varina, John Gault, Dagny Taggert, John Adams, Edward Rutledge, and the people in James Blish’s Surface Tension is because the authors take the readers on emotional roller coaster rides (as described in Heartbeats). Lucky Jones‘s roller coaster ride starts with word choice (“backed away”, “The Swede”, “knife”, “soon” and so on). We bring the reader’s emotional heartbeat back down when Jones escapes. The reader, like Jones, breathes a sigh of relief; Lucky’s safe, hurt but safe, so the reader relaxes a bit. Then we wap them with the paddles by introducing the police.

Good writing creates heartbeats (they can be emotional, physical, spiritual, intellectual) and gives readers roller coaster rides in every scene, chapter and the novel as a whole.

The Lucky Jones scene is an example of action based tension. It works well in adventures, quests, thrillers, crime, anything where people are hurting each other physically or threatening to do so. It’s interesting, engaging, riveting, …

…and it can’t go on forever. For one, your characters would die of exhaustion. At some point everything and everybody needs to rest. Machines run out of fuel, people get hungry and tired, it doesn’t matter; energy economics dictates that things, at some point, rest and refuel.

There’s also the problem that relentless action will bore your reader and for the exact same reason; they also need to rest from all the action scenes you’ve written. There’s such a thing as too much action.

Physical action is interesting but it can be tiring.

Watching characters prepare for action, however…

Think of any historical book you’ve read or movie you’ve seen. You know the outcome, correct? Yet there’s still tension, drama, adrenaline-pumping, page-turning stuff going on when the author’s describing what’s coming (what’s not happening yet, what’s being prepared for). Reading about troops preparing to invade, about explorations beginning, … The scene with Elijah on the dock in Moby Dick has next to no action yet the tension drips off the page like water off Moby’s back. Not much action, much tension.

A Lens into Character
Planning for action – especially if both sides are well matched – is a lens into character(s). Their conversations, their thoughts, their behaviors, hearing troops bolstering each others’ spirits, watching comrades encouraging each other to bravery while hiding their own cowardice, all point to that conflict (which may never happen).

If you really want your audience to pay attention, have two characters arguing and make both of them right. – Neil Simon

Another type of tension occurs when you have two equally matched characters pitted against each other and both are protagonists.

John Gault and Dagny Taggert in Ayn Rand’s Atlas Shrugged is an example. Both are acting towards a good goal. There philosophies hence their methodologies are in opposition. Much of the pleasure of reading Atlas Shrugged comes from finding out how that philosophical conflict resolves. Edward Rutledge (John Callum) and John Adams (William Daniels) want much the same thing in 1776; Independence. But the philosophies regarding Independence differ and that conflict is the real story, more heartpounding (to me) than any gun duel, sword fight or hand-to-hand combat scene.

Or buy your next one.

One thought on “Tension”

Sister Rox @1rburkey Burkey and the @enigmaseries are doing a #Kickstarter from 30 Nov 2020 to 8 Jan 2021 to kick off the holiday season with their latest adventure ready to launch in January 2021.
Please share!
https://www.kickstarter.com/projects/enigmaseries/the-enigma-threat

Fantasy is an exercise bicycle for the mind. - Terry Pratchett #quotes