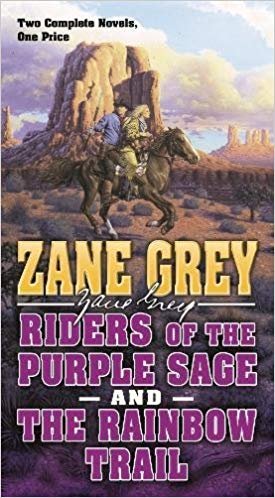 “A sharp clip-crop of iron-shod hoofs deadened and died away, and clouds of yellow dust drifted from under the cottonwoods out over the sage.” – Zane Gray’s Riders of the Purple Sage
I mention on Goodreads that Riders of the Purple Sage is one of my perennial reads. I started it again this month and stopped with the first line. Prior readings, I wasn’t sensitive to opening lines. Since my last read, I’ve done some studying of opening lines; what works, what doesn’t, and specifically what makes one opening line great and another ho-hum.

Readers unfamiliar with Gray’s work are missing out on so much. He is a old school master storyteller, meaning his storycrafting blends so much and so expediently that the reader is either in or out of the book’s mythos as rapidly as possible.

Case in point, Riders of the Purple Sage‘s opening line, “A sharp clip-crop of iron-shod hoofs deadened and died away, and clouds of yellow dust drifted from under the cottonwoods out over the sage.”

This first line also foreshadows the story; a near harshness – elegantly demonstrated in the first chapter – yields to a distant warmth and softness (not going to tell you because it’ll give too much away.

I don’t know about you but I want to dust myself off after reading that sentence. And I want a drink of water (which also plays a character development role in the first chapter). I can feel the heat of the sun, the harshness of the environment, and am primed for the conflict to come (again, the near-far juxtaposition).

Must reading, folks. Must!