“If in the first act you have hung a pistol on the wall, then in the following one it should be fired. Otherwise don’t put it there.” – Anton Checkov

I keep running into editors and publishers wanting trigger warnings when submitting manuscripts.

The need for trigger warnings confuses me because it raises a question about storycrafting, specifically the aspect of storycrafting known as foreshadowing.

If I, as an author/storyteller/writer, have done my job, the reader won’t need a trigger warning because any story element requiring a warning will be warned of well ahead of its happening by previous events in the story itself. And don’t say “What if in the first scene…” because now you’re talking genre tropes, not storycrafting.

Does some event come out of nowhere without precedent? It doesn’t belong in the story, or the story needs major revision. 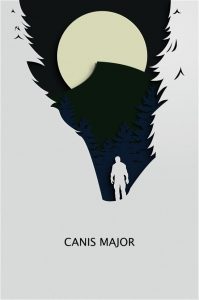 1) Canis Major‘s opening scene has the protagonist, Ignatius “Iggie” Turner, dropping out of a tree onto a fawn. He bites into its throat and tears out its esophagus, jugular, and muscle tissue. It’s clear (I hope) Iggie is going to kill and eat the fawn.

But Iggie also feels remorse and pity. He doesn’t want the animal to suffer. He wants to do what’s right, what his father taught him to do when taking a life. He curls a forepaw into a fist and punches through the fawn’s ribs to crush its heart.

Thus in the opening paragraph I signal the reader Iggie is different. Is he a reasoning beast? Perhaps a deformed man? Someone with a bizarre mental illness?

The next paragraph is shown as an excerpt:

It’s clear from what follows the above in the story that the excerpt is from a pre-Tinder personals ad, and it’s from Iggie.

Again, if I’ve done my job, the reader is intrigued enough to continue reading to learn about Iggie, and nothing Iggie does in the story should come as a surprise because he has both beast and man natures (obviously there’s a bow to Beauty and The Beast but, truthfully, I didn’t have that in mind when I originally wrote the piece).

2) The Augmented Man‘s opening chapter has the protagonist, Nicholas Trailer, in a bar and obviously out of place. It’s also obvious – hopefully subtly so at first – he’s different. The opening paragraph has “His fingers hovered over the cigarette burns closest to him as if divining their cause, sensing them like small, unhealed wounds, seeing the people involved, learning if each burn was an accident or intentional.”, the second has “The door opened and he smelled the cool April evening on his skin.”, and the third has “…collating the activity immediately around him.”

This oddness (I mean, who collates what’s going on around them?) culminates in the last three paragraphs with “Before Eddie’s thought became action, Trailer’s spine released and he grew.
The barman’s claw didn’t open in time and he screamed as his prosthetic ripped out of its socket.
Trailer’s eyes closed and his face relaxed, becoming calm, pacific, the face of a child fallen asleep. He brought his head down hard onto Eddie’s skull and smiled at the sharp-sounding crack.”

If the reader doesn’t yet understand Trailer is capable of extreme violence and is trained/adapted/modified to do so…well, I don’t know where to go because all the signals are there.

Another thing the reader learns about Trailer in the opening chapter is he’s reluctant to be violent. He doesn’t choose violence, it’s more like he has no choice, hence he’s conflicted and solving that conflict takes up the novel.

My point is…
My point is good writing (and I won’t assume I’m good at it, only claim that I work at it) doesn’t need trigger warnings because good writing communicates – ie, foreshadows – what’s coming so the reader isn’t blindsided by something happening in the story.

Have you ever watched a tv show, movie, or play or read a story or novel where the character did something totally out of character, and to the point you stopped watching/reading?

Happens to us all the time, and it’s because the author/writer/screenwriter/playwright didn’t do their job foreshadowing a character’s capabilities. Ditto plot points. We’re forever asking each other and others “Where did that come from?”

The moral is…
Do your job as a creative and make sure you foreshadow what’s coming. Take out anything that doesn’t point to what comes later in the story.

That’s your job. Make sure the gun is used. If a character has some distinctive trait or mannerism make sure it plays a role later on (usually some kind of plot point).

And don’t give out trigger warnings. The story’s suppose to do that.

And if you do your job correctly and well (never a guarantee to either, I’ll admit. But so long as you’re satisfied…) and the reader gets all conflummoxed because they stub their reading toe in Act II over the obviously and assuredly placed rock in their path in Act I, find a different audience. They’re obviously not worthy of reading your work.

Okay, okay. This is clearly a Butchers, Bakers and Candlestick Makers thing. Do all your readers miss your subtle foreshadowing? Check and make sure you’ve done your job correctly and well, and be honest, not an egotist. Everybody makes mistakes.

But if two-thirds or more of your audience gets your foreshadowing? Figure out what the other third has in common and make sure you either a) avoid them when sending out material in the future or 2) find a way to include them in your reading audience without pissing off the existing two-thirds you already have.

Or write directly for them and hope the one-third is larger than your existing two-thirds, but now you’re whoring yourself.

And remember how fickle johns are when visiting whores. You may be top momma today and cast aside tomorrow, and now you’ve lost your entire reading audience.