I got ya charts right here, they make the data clear, unless you’re doing metrics you’ll never know if you’re near. Can do, Can do. This is what metrics can do…

This is the fourth post in a thread on author marketing metrics, specifically regarding some fascinating advice I got through a Facebook group (that spawned these posts). Part 1 provided a cantankerous but realistic intro to the subject of author marketing metrics. Part 2 started an analysis of the advice along with a few suggestions re selecting keywords on Twitter and Amazon and closed asking how one demonstrates their story-telling and -crafting ability in a tweet (we’re getting there). Part 3 continued the analysis.

Here we get to some tough questions that should be asked about any advice you get. But before we do…

Only take advice from someone you’re willing to trade places with.

I’m not willing to trade with the person who gave the advice analyzed in Part 2 and Part 3 (should be obvious from my comments on the advice. if not, read the following).

The back and forth analysis in Parts 2 and 3 is interesting and fun (to me, probably not to anybody else) and is a long-winded version of my response to the original post:
I really asked (paraphrased), “What are the results?” I asked because, okay, you use a unique keyword of your own devising. Excellent! How many people respond to it and how do they respond?

If you don’t know, you’re back to that spaghetti on a wall thing.

And here was the response that got me thinking smoke and mirrors (probably unintentional) were taking hold: There’s no way to know how many people look at your tweets. I have grown my twitter following to over 11, 000. How many of them have looked at a book? I have no idea.

Well, hot dang shaboobie! My twitter following has grown, too, and I’m not doing anything this person suggested. I’m just having fun.

But people following me have tweeted how much they enjoy my books, have retweeted my book signings, appearances, offers, and I’m not even counting Likes.

Criticism without solutions is worthless. – William Murdoch
First, there is a way to know how many people look at your tweets. Like most things in social analytics – hell, like most research, period – it’s done via proxy. Regarding Twitter:

It’s one thing to grow your following, it’s another to determine how much it’s grown over time. Continued growth over time is 1) a good thing and b) a reasonable proxy for how many people are looking at your tweets. Consider it this way; why would anybody follow you if they don’t care about you or what you offer? (want to make sure they see your tweet? We’re back to that “voting in Chicago” thing mentioned in Part 3) There may be some social collateral in saying, “Oh, yeah, I follow him/her/them on Twitter,” at gatherings but following isn’t paying attention and is definitely not responding. Back in the day (when I worked in analytics), an entrepreneur boasted of having over 7MM followers. We did an analysis. We routinely dropped into this person’s stream a basic “tweet me back when you get this.”

Not the response one would have expected from such a prestigious personality. Percentage-wise, I get more responses than this person did.

This person quickly went from being an influencer to being an idiot. Sure, there were lots of followers. Nobody paid attention. Who was being influenced?

(addendum: we got fired from this social project. I have no problem telling truth to power. Sometimes power has lots of trouble accepting truth.)

So if you have continued growth over time, good for you, you’re getting noticed and people are genuinely interested in what you do. Want to be a bit more diligent about it?

Get some charting software (any spreadsheet package will do). Put the days along the horizontal line, the number of followers low to high on the vertical line. Go to a day, go up to the number of followers, make a dot. Do this as many times as you’d like (I suggest a week as a start). Draw as straight a line as possible from the first dot to the last dot. Is the line higher on the right than on the left (green line below)? You’re doing good. Somedays your dot may be above the line, somedays below (blue line below). Doesn’t matter. Does the line go from low left to higher right? You’re doing good. 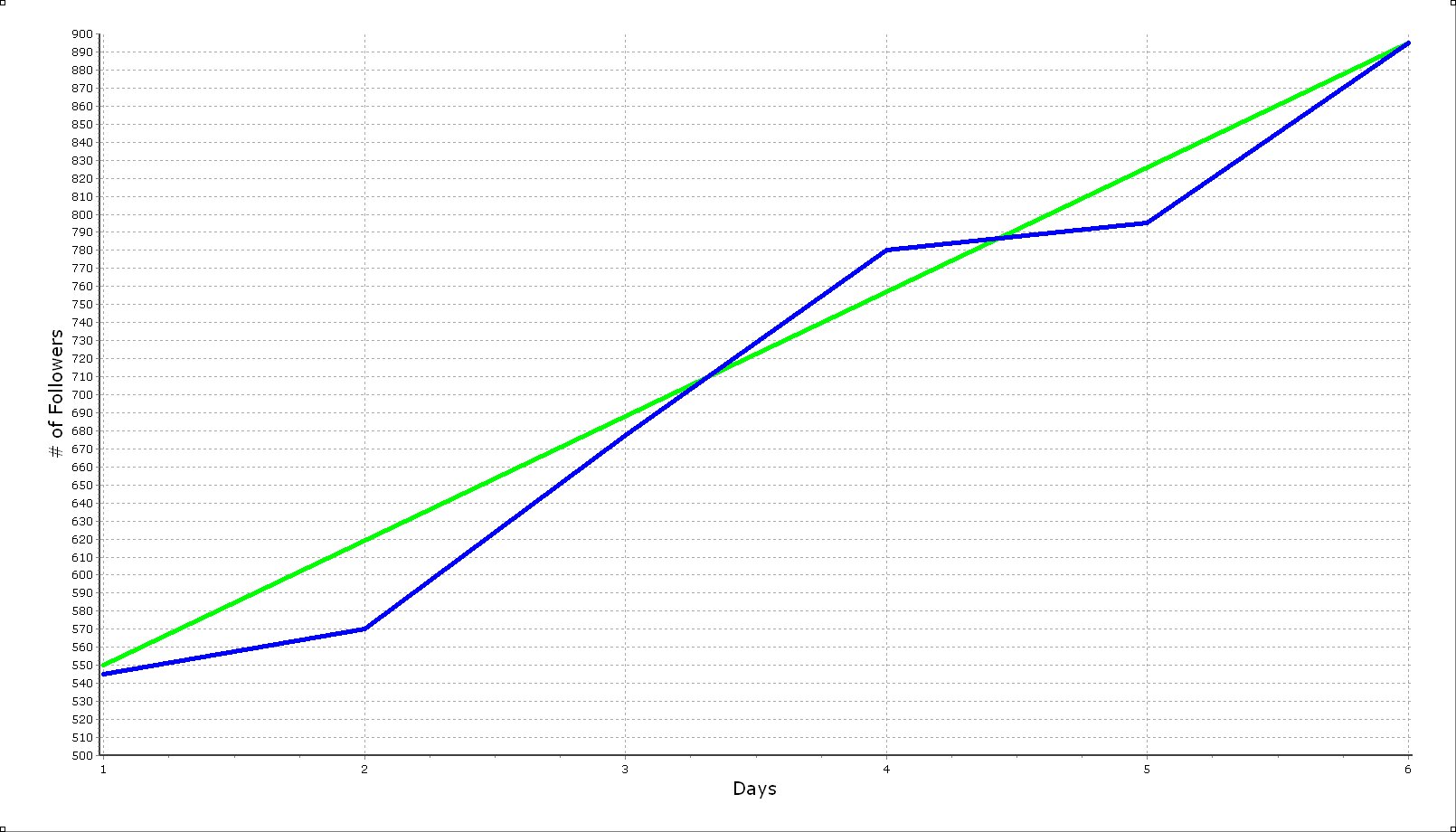 Likes and retweets are also good proxies. But there are three kinds of such beasties:

Metricizing gets you targeting, meaning you’re closer to getting the response rates you want because now you know who to send what message to. Want to get lots of response to your #SciFi tweet?

Hey @follower1, @follower2, and @follower7 – Check out my #scifi piece on http://nlb.pub/amazon and let me know what needs fixing. Thanks!

Is it worth it?
I’m a big ROI guy. I also recognize ROI comes in many forms. There’s the obvious financial ROI – are you selling more books? I hope you do. Developing a system such as outlined here (and it’ll work for any system using keywords (#hashtags are essentially keywords)) takes time, and I don’t like taking time away from my writing (yeah, even this blog post is me practicing my writing).

The theme here is What’s good for you? Easy – are you happy? If you’re happy with your numbers then it’s good. Can you make it better? Maybe. Do you want to put the time into making it better? You decide.

(anybody notice I haven’t covered “How do you demonstrate you’ve written a well-told, interesting story in a tweet?”
that’s a big question. let me think on it a bit and get back to you.)

2 thoughts on “Metrics? We don’t need no stinkin metrics! (finale)”

I think my liver is disintegrating and it kinda tickles

Helen McCrory went to my old school. When I was applying for drama schools, I wrote to her, she paid for a train fare for me to come to London to audition.

As a fresh grad, I worked at a baby class to pay rent which her kids were in, reminded her of her generosity, she told me

Amazing northern lights tonight. (My neighbour took these.) I can’t hear them pop but they look amazing.