Interviewed me, I mean.

So, yeah, we covered a few things.

I first wrote Man and Boy sometime in the early 1990s, possibly late 1980s. I remember reading publicly and the next reader, a published author, making a derogatory comment about the story’s tone and subject matter.

I’ve kept it on a backburner ever since, sometimes taking it out, sending it out to a few places then putting it back. I’ve always felt there’s something here. Maybe it needs to be longer, a full story and not a flash piece.

Last week’s The Shackled Man had been in my head for a while and I wrote it up for a flash/slam fiction class I took. I decided Man and Boy might also be a good candidate, so dusted it off and revised if from the previous version. You can get an idea of the revisions by comparing the two. Basically I cut out everything that wasn’t “in the moment” of the story, which I originally wrote as an exercise in dialogue (still think it’s a great example of dialogue carrying a story).

So, as always, enjoy and let me know what you think.

Creator and above level members can listen to my test read.

“First time we go fishing in a week and you snag your line on a boy’s been dead in the water who knows how long?”

“Don’t know that until we know who he is. Help me get him in the boat. God, this one’s heavy. Ain’t swelled, though.

“Somebody didn’t take a liking to it, that’s for sure. And look at them clothes. You ever seen clothes like that, son?”

“What do you know about city clothes?”

“I seen them in the catalogue at Mr. Howard’s store.”

“What you doing down at Mr. Howard’s store?”

“I run errands for Mr. Howard sometimes and he gives me a penny so I can buy some candy.”

“So this here’s a city-boy, huh? Somebody killed themselves a city-boy.”

Ever read a story and say to yourself, “Wow! That’s how it’s done!”?

I get exhilarated when I discover a new author.

Let me clarify. There are lots of people out there writing books. In my opinion, few of them are worth reading (I’m a writing snob. There, I’ve said it).

But once in a great while I encounter some writing that so pulls me into its story, calls me into the story’s mythos so completely that my pulse quickens, my eyes open wider, my breaths deepen, … When readers have a physiologic reaction to your writing, you’ve arrived.

Such a story is Cheryllynn Dyess‘s The Soul Maker in Harvey Duckman Presents Volume 3.

The Soul Maker is a wonderful story because it combines great storytelling – do you have an interesting story to tell? – with great storycrafting – can you tell that story in an interesting way?
END_OF_DOCUMENT_TOKEN_TO_BE_REPLACED

The Goodreads blurb is “Some of the best advice available on how to create character, use description, create a setting and plot a short story.” The Amazon blurb is “Here’s a collection of the most helpful articles from WRITER’S DIGEST magazine covering every aspect of short story writing. Every writer, from beginner to professional, will find guidance, encouragement, and answers to such concerns as how to make characters believable, developing dialogue, writer’s block, viewpoint, the all-important use of conflict, and much more.”

Definitely some advice although not until the third section (Characterization). The first two sections read more like Brenda Ueland’s If You Want to Write, basically cheering sections for those unsure and/or starting out (which is to be expected. This was the handbook for the Writer’s Digest Fiction writing course).

I can believe that the separate chapters were Writer’s Digest articles. They both read as such and, from a business perspective, why solicit for something already owned?

Is it helpful? Yes. I was suprised at how much new (to me), useful information the book contained (once I got past the rah-rah sections).

There’s enough in here to keep writers developing their craft going for quite a while. I do recommend it. 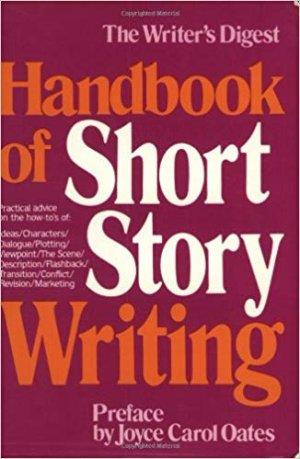 Greetings to @turbinesnengine who use to be known as @turbinesnbeer (either way, one heck of a combination)
live & die by the hustle
https://www.youtube.com/watch?v=OR1FOY84Tos&feature=youtu.be

Greetings to @BookBlogger810
Book Blogger, Enthusiast of Hiking and Nature Photography as a Passtime.
(what kind of books do you blog about?)