Opening lines that propel the reader into the mythic

I had a problem with the websites: they offered a line, its source, but didn’t explain why the line is great.

Perhaps they feared being subjective, hence being called in error. Kind of like everybody pointing at the sun and saying “That’s the sun.” Not much argument. Ask “Why is that the sun?” and people wonder at your intelligence if not sanity; isn’t it perfectly obvious that the sun is “the sun”?

We’re back to the toddler expressing pure joy. I’m not questioning that the sun is “the sun”, I merely want some reasons behind the statement. There are other stars in the cosmos. How come they’re not “the sun”?

Well, to the denizens of some planet orbiting those other stars, said star may indeed be “the sun”.

I may agree the sun is “the sun” and I may agree an opening line is great/beautiful. I may not know why. Don’t explain your reasoning and I remain the joyful toddler, able to experience joy but not being able to recreate it at will.

I agree with some and definitely not all of Fish’s selections. The ones on which I disagree are due to their lack of elegance.

Mathematicians word for “beauty”, “great”, “excellent”, et cetera, is “elegant”. Elegant mathematical proofs/solutions have two qualities combined: purity and simplicity. Purity means there’s nothing extraneous in the proof, no confusing elements that need to be removed. Simplicity means you can get from the first step to the last with a minimum of moves, with little effort. I can tell when a mathematical proof is elegant and I’ve been involved in mathematics since 8th grade (Yo! Miss Turgeon! Remember that “F” you gave me because you didn’t understand the math? I’ve got patents based on it now!). I can tell a good Scotch from a not so good Scotch (Moran Tang, Calum!). Sometime soon I may be able to tell a good wine from a not as good wine.

Some of Fish’s selections for great opening lines aren’t elegant. They’re so convoluted (beautifully written, yes) that I have to read them either slowly or several times to figure out what they’re about (inelegant). 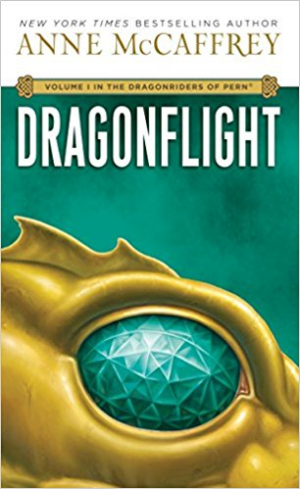 “Lessa woke, cold.” – Anne McCaffery’s Dragonflight
First, wow, it doesn’t get any better than that. This is the opening line I always come back to when discussing great opening lines.

I mentioned in Part 2 that great opening lines take you into the book’s mythic and you’re either in or you’re out. This line takes you into the mythic because everyone has awoken and been cold. Two physical experiences shared by everyone on the planet. Read “Lessa woke, cold” and if you’ve ever woken and/or been cold, you’re experiencing what Lessa’s experiencing.

Also, if you’re from a western educational background, the name “Lessa” signals a female. Lessa, female, Lesso, male. The single name, Lessa, implies a middle-class if not lower-class background. It’s not “Madam Lessa”, “Princess Lessa”, “The Lady Lessa”, it’s simply “Lessa”. People tend to root for the underdog, middle- and lower-class people tend to be underdogs in stories, so the reader is rooting for her without realizing they’re rooting for her. The majority of fantasy readers are (or at least “were”) from the middle- and lower-classes. Upper class people read popular books so they can talk about them when they gather, to demonstrate their knowledge and expertise/experience. Middle- and lower-class people read popular books to escape. The reader ego-identifies with Lessa based on shared cultural experiences.

McCaffery propels you into the story’s mythic in three words. 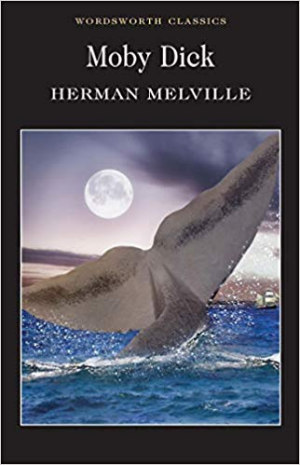 Also, “Ishmael”. The biblical Abraham’s first son and the one cast aside, discarded, denied, yet also the one God hears. The narrator wants us to know that he’s both discarded and favored. The book’s title is “Moby Dick, or The Whale” therefore our narrator, because he’s telling the story as something that happened to him, that he experienced, tells the reader “The Whale both discarded and favored me.”

The narrator doesn’t want you to know he’s the sole survivor of a disastrous whaling expedition, but does want you to listen to his tale of redemption, of being both discarded and favored by an evil god, ie, The Whale. 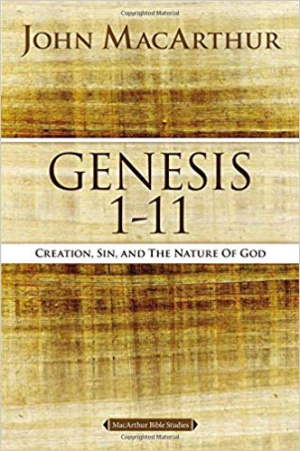 “In the beginning, God…” – Genesis 1:1
Believe or not, the Judeo-Christian bible has a great opening line. It sets the tone for the rest of the bible and for belief. “In the beginning” = “there was nothing before this. It starts here.” “God” = “this is the being who made everything else possible. There was nobody else doing anything, there was nobody else to do anything, whatever comes after, this is the being that’s doing it, that’s in control of it, that’s getting it done.”

Anything you question, any discussion you have, any challenges you want to present, if you proclaim the faith, In the beginning, God.

We had a joke in seminary. The opening line of the bible also demonstrates that baseball is god’s favorite game: “In the big inning…” 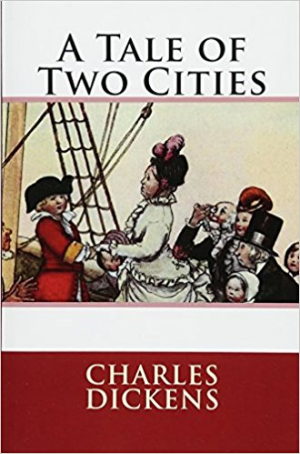 First thing, I can hear the exhaustion in the narrator’s voice. “was…was…was…” A no-no in any modern writing guide, Dickens pulls it off by see-sawing the reader between extremes: wisdom/foolishness, belief/incredulity, Light/Darkness, … You’re either bouncing against the wall or rollercoastering to hell and back by the time you finish this one sentence.

But then Dickens hits you with “in short, the period was so far like the present period…” Not only was “it” the ping-pong game from hell, it’s exactly the same way now. Nothing’s changed. You were tired reading that first sentence? Catch you breath, we’re just starting.

But wait, there’s more: “that some of its noisiest authorities insisted on its being received, for good or for evil, in the superlative degree of comparison only.” Hey, politicians haven’t changed, governments haven’t changed. In one sentence the reader is primed for pure pessimism; fear and loathing in London and Paris. Gotta love it!

For what it’s worth and while we’re on the subject of Charles Dickens, I’ll throw in “I am born” from David Copperfield. It doesn’t qualify as an opening sentence – it’s a chapter title – but you can’t argue with a narrator telling you that everything starts “here”. This is Dickens taking a swipe at God in Genesis and a damn good one for pretty much the same reasons. 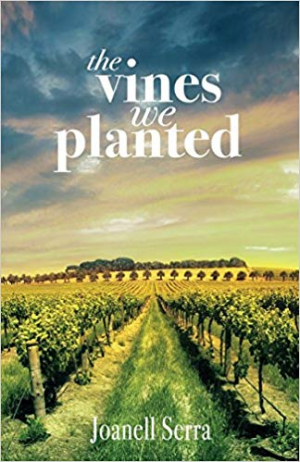 We know immediately who the story’s protagonist is; Uriel Macon starts the book and the reader is sharing his history and world. Anybody who’s been around horses or ridden them immediately feels the saddle under them, the steadiness of their gaits, with “began riding horses”. You smell their sweat and hear their breathing. If you haven’t ridden a horse you’ve seen one ridden in real life or in the movies. You don’t have the full experience to draw on and you have enough to start you in the book.

Next up is “…before he could read…” Not only are we on the horse, we’re a child on the horse. A toddler. More images. “…his hands grasping his uncle’s waist…” Comfort, trust, a knowing elder. “…as they rode the trails along the northern edge of the Sonoma Valley…” Even if you’ve never been there, you can imagine riding along a mountain crest shielding a valley. If you have been there, you can see the valley, the vineyards, the scrub, feel the heat, smell the earth. Even if you haven’t been there, I’m sure many of those sensory impressions are available to you. “…inhaling the scent of ripe grapes.” More sensory detail. Specifically, heady, primal sensory detail. 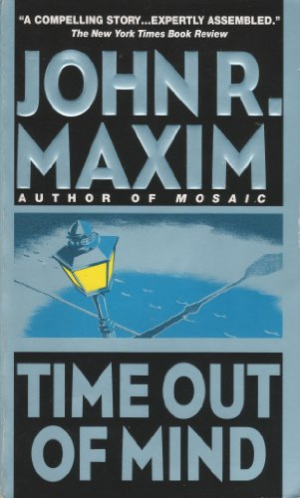 “He did not have the look of a man who frightened easily.” – John Maxin, Time Out of Mind
Here is a first line that causes questions: Who is “He”? “What’s frightening him?” We know immediately the “He” is frightened by something. The only way to find out what is frightening him is to read more of the story. We also know something about him. Whatever is frightening him, it’s causing a reaction He doesn’t normally have, a stronger than usual reaction, ie, this threat is big, important, something He isn’t use to, not part of his common experience.

If that’s not enough, chances are the reader is discomfited, ill at ease, made uncomfortable by that first line; He is not easily frightened but he is and we, the readers, don’t know what is frightening him. Perhaps we should be frightened, too? 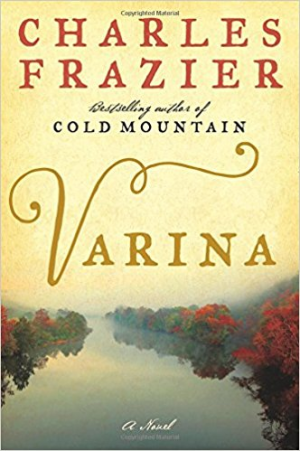 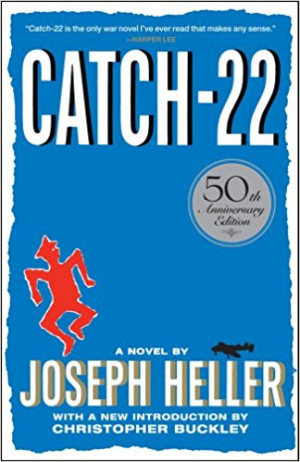 Regardless, most readers being told “It was love at first sight.” become curious. Who’s in love with whom? What was that meeting like? Then the reader is hit with the zinger, “The first time Yossarian saw the chaplain he fell madly in love with him.” We may know little else about Yossarian but we do know Catch-22 is about WWII, specifically the US military during WWII, Yossarian is a male and the chaplain is male. We’re given a demonstration of the existential conflict that drives the rest of the novel in the first (two) lines.

But what type of love was it? It was a “mad” love, implying passion, probably denied physicality. The reader has to keep going to learn how this is dealt with in the novel’s environment. And if you haven’t read Catch-22, it just gets better.

There you go, my first set of great opening lines. This list will extend through other blog posts as I discover more great lines. Remember to share yours with me (and give me your reasons). I look forward to learning.